We chanced upone a little bar in Llanes where the owner invited us to dance. 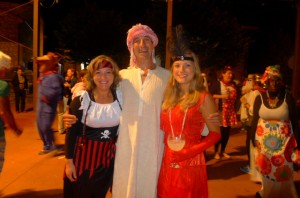 As we were driving back down to the sea after four days in the Picos, we reflected on the extraordinary nature of this village fiesta. Above all, we admire the stamina of the 360 village inhabitants to put on a fiesta of such magnitude! Four days of partying through the night until 6am! Two great stages that would do well as main stages in Glastonbury festival, three processions (one strangely Heathen, one strangely Christian, and the last one a random Carnival-type of procession), and all bars open until the wee hours.

There seemed to be a theme about women running through the festival. No doubt in the olden times, the women met up to sew their costumes in the run-up to the festival. The shawls are beautifully embroidered and seem to be heirlooms, handed down the generations. All costumes have jet stone hangings too, a stone local to the region.

We saw the women gathering in one of the restaurants on the Thursday night, while the men congregated in the bar a hundred metres down the road. There was a definite ‘hen and stag night’ feeling in the air.

I wonder what it feels like for a guy from the village to see this formidable group of girls and women coming down the road in full festive clothing, in ranks of five, beating a hand drum – intimidating? For the women, it must give them a strong sense of belonging, of being supported, backed up by their friends.

The ritual of the men carrying a supersize lit effigy of Maria de la Salud through the village, and finally lighting a big firework where the last banger blows the statue’s head off seems to me an homage to orgasm J – not exactly a Christian custom, I think.

I was fascinated by the sounds at the Sunday procession. Listen to the short video we made:

Don’t worry, it rights itself after a few seconds!

(We hope this works… just trying things out on youtube, as it was too big for the blog…)

you have the band playing a fairly repetitive traditional tune with Gaita (bag pipes) and drums, then you have the women drumming their three-beat rhythm, not necessarily in tempo with the band but instead following their own woman drummer, you have church bells rung by hand with a rhythmic pattern to it, and again not necessarily in tempo with anyone else, but almost, and to top it all, there are rockets which go off at a random frequency right next to the procession, so that the sticks and other debris rains down on the people.

It is a cacophony, but I’m sure it is intended. If it was all in time with each other, the size of the procession would shrink and it would all become like a march, and probably feel quite trivial. As it is, the village creates a hell of a racket with just a few people.

The Monday night procession had an entirely different feel to it. It seemed to be just the villagers among themselves, rather than many outsiders joining them. They dressed up in funny costumes. Everyone was involved, from small children to teenagers and adults.

The procession went another way, a much wider circle, and stopped at many houses where older people were sitting outside. Some of the dressed up people would go up and talk to the old people, maybe offer them from their drinks (lemon and rum out of a bucket!!!) or do a little dance for them. And off the procession would go again, not leaving out a single house. This way it took over one hour to get through the village, and all along, everyone was laughing, chatting, making noises, remaining engaged. The dress themes included: Asterix and Obelix with an Obelisk on a cart pulled by a donkey surrounded by a few romans; a pirate ship pulled by a tractor; a group of can-can girls; four ghosts; two nurses and a nun (three guys); a few shepherds complete with goat; some people with meticulously painted faces, and of course a sheik who flummoxed everyone, as he didn’t belong to the village, yet was dressed up (Frank!).

Once the procession was over, the dancing started with a small open air disco.

As usual, we gave in to tiredness at around 2am. When we left, we saw around 30 sky lanterns rising into the air, amidst a few more loud bangers. In fact the bangers and the music carried on until 6.30 in the morning! 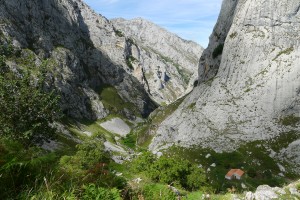 We took Emma up into the mountains today! We went from Areña de Cabrales up to Poncebos where we left her by the side of the road and took the funicular up to a little village called Bulnes. Incredible, this village must have been very cut off before the opening of the funicular in 2001! No road leads to it, only mountain paths.

After a look at the mounains from a view-point above the village, we decided to walk back to Poncebos, down a steep valley. This was a beautiful walk, full of interesting views, many vultures (or are any of them eagles?), sunshine and a cold river to swim in. what should have taken 1hour and 15 minutes to walk took us about 3 hours, but we had a great time, stopping frequently to gawp at the fantastic views.