Portugal is treating us kindly. Beautiful smells in the hills lead us to wild thyme and rosemary. The villages have pumps with fresh water. 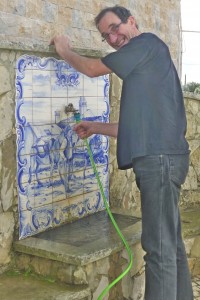 Oranges abound – we find trees in public spaces or outside abandoned houses and help ourselves to fallen fruit. We roast orange peel and eucalyptus leaves on top of the wood burner and enjoy the beautiful smells permeating our ‘house’. 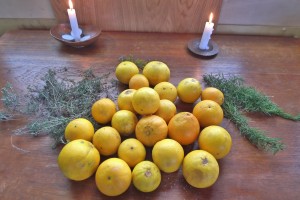 Strong winds against the side of the van rock us to sleep, the rain washes the dirt off Emma at night and the sun loads up our solar lights by day. We wake up to beautiful seascapes, the water roiling below us, waves vying with each other in their race to reach the shore.

Due to our bad map of Portugal, we find another special place. Once again, we get lost in the middle of nowhere and stop by a farmer’s house and ask for directions. I’m now keen to practice my newly gained Portuguese, so 10 minutes later, we leave not only knowing where we are but with a recommendation to see a village called Cháos (not on our map). Don’t be fooled by the way the name looks, it’s pronounced kshonge, or something like that – not unlike the French word for change and means the ground upon which we stand. We are told they make good local food, so we drive up there to find out.

What we find is a village that, with the driving force of two main protagonists, has created a viable business that benefits many of its inhabitants. There is a cultural centre at the top with a bar and restaurant as well as some accommodation. Good food is served – regional recipes made with their own meat and veg. Next door is a workshop with several looms, where some local produce such as honey and woven artifacts are for sale. Also nearby is a building dedicated to apiculture and we see a herd of freely roaming goats, watched over by a shepherd.

We hear from Ricardo, one of the younger members of the cooperative, that the initiative grew from a group of folk dancers. The idea was to create a number of diverse projects, so that the younger generation would find reasons to stay in the village rather than decamping to the city, as has happened to so many communities in both Portugal and Spain. All projects are created with the aim of being self-supporting. Everything is interlinked and benefits the community as a whole. They also organize international work camps in the summer, where people come and stay for a couple of weeks, indeed some of the buildings were built by international volunteers. Last year’s work camp was dedicated to maintaining the old mountain trails, clearing the paths and repainting the signs so people wouldn’t get lost anymore. Another project is to offer countryside experiences to young people from the cities, involving them in farm activities, such as planting and harvesting potatoes or milking goats.

The community is a pioneer example of social enterprise and they host conferences for people from all over Europe on this subject. Everything new is done with local traditions in mind, so for example they re-introduced the goats that had been roaming these hills for many hundreds of years, their eating habits being tuned to the local vegetation. They help to clear the undergrowth, thus reducing the risk of fire in the summer months, which gains them the nickname ‘firefighters’.

You can contact the cooperative of Cháos by clicking here. It looks like a great place to come for an international work camp!

To see a few more photos, including an ancient dolmen that was incorporated into a church in Alcobertas (near Cháos), click here