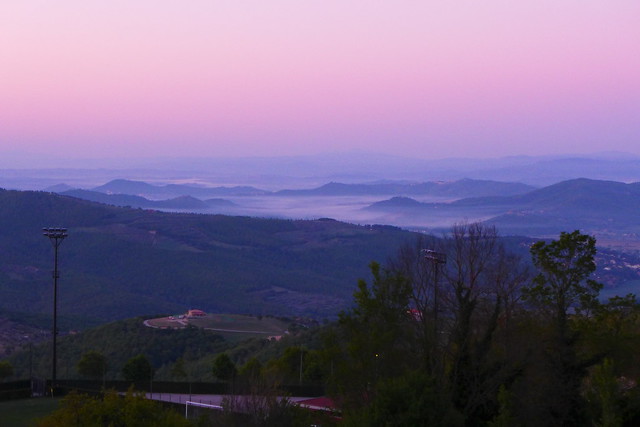 When we arrive in Castel Rigone, we experience a two-fold shock: Firstly, it is really cold! We hope it’s just a cold spell and not due to the fact that we are rapidly travelling northwards. Secondly, everything looks super neat and tidy, manicured even, and an eerie silence hangs over the village. We walk around, taking in the beautiful vista of Lago Trasimeno on one side and the rolling hills of Umbria on the other, but we are unnerved by the uniform perfection around us. Compared to the rough charm of Southern Italy and Sicily, this doesn’t feel like Italy anymore – it’s more like a wealthy area in Southern France. 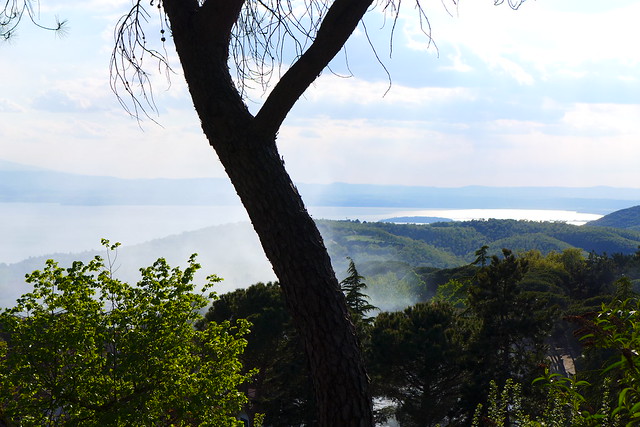 In a local shop, we meet Judi, an English woman who fell in love with this area many years ago and more recently decided to move to a tiny house by the roadside. She invites us to come and visit – just follow the road and you’ll see a tiny house with stairs leading up to it. You can’t miss it! Indeed we can’t miss it. Judi is an artist creating children’s stories with a number of home-made, hand made puppets called The Jumbles, and her house is aptly called Jumble House. The steps leading up to the tiny door are decorated with flowers of all colours and other bits and pieces. Even before entering, you meet the world of The Jumbles. 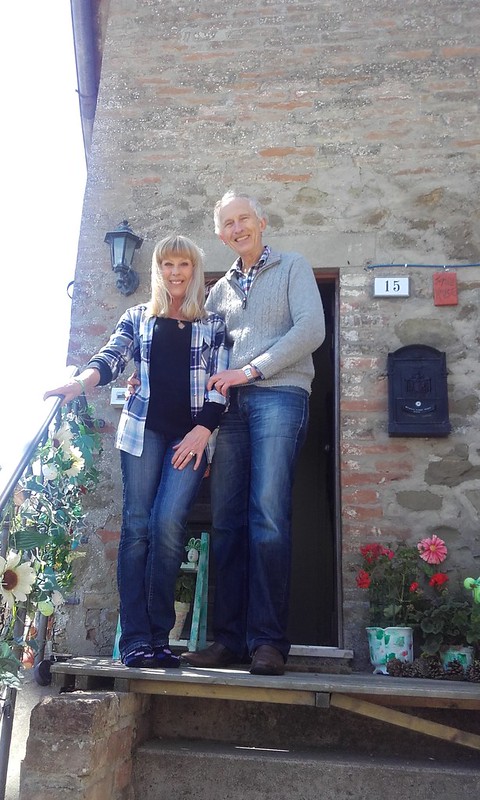 Judi’s artistic talents found a channel when she became grandmother. To make contact with her granddaughter who lived far away in Singapore, she began to create puppets using tights and other bits she found around the house. Using her I-pad, she took photos or film clips and developed stories around the pictures. The backdrop might be the kitchen in her house or a local park, and her puppets, the Jumbles, get up to all sorts of things on a daily basis. Amongst them is a forgetful witch, who gets her spells wrong and creates all sorts of strange things, or the Jumbletufts, who turn up and create order from chaos. 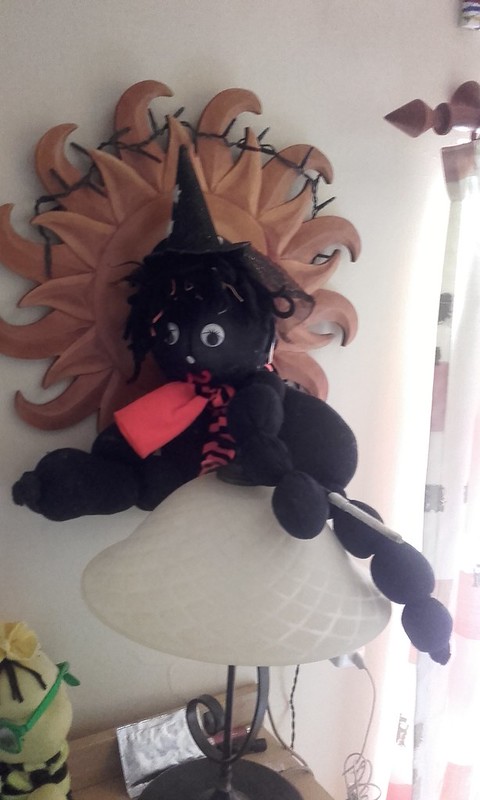 Her granddaughter must be chuffed to have such a productive grandma – there are over 150 clips of the stories on youtube!

Judi tells us about the difficulties of filming in the village without being perceived as completely bonkers. She has to wait until two o’clock, a time in which every self-respecting Italian is indoors, having lunch. Only then does she venture out, armed with her I-pad, a witch and a broomstick, getting herself into strange places and positions to take the photos. It has been known that she’s forgotten to collect all her Jumbles after a shoot and returned the next day to find them still hanging in the same tree where she ‘d left them.

Both Judi and her husband are so quintessentially English in one way and so not at all English in another way, it’s delightful to spend some time with them and hear about their adventures in settling into the Italian culture, brought to the fore in the process of buying a piece of land and building a house. Michael was an accountant and his experiences of the culture clashes in the world of accounting and otherwise dealing with authorities are mind-boggling.

The following day, Judi and Michael repay our visit and come see us in our Emma, which is in fact not much smaller than their house!

When we are about to say good-bye, Judi pulls one of her puppets out of her bag: it’s one of the Jumbletufts and he’s decided to come with us on our journey.

You can find out more about Judi’s creative ventures on her web site Jumblefun.net

For photos of this chapter, including the cold but beautiful sunrises we experienced in those days, click here

Tucked away in the Umbrian hillsides lies La Rogaia, a venue that might be familiar to some of our readers, as it hosts Tango holidays, among other active holidays, like painting or Italian cooking. We had contacted Annette and Wolfgang a couple of weeks ago and they kindly invited us to join their current Tango course for the evening meal and the Milonga afterwards, so at an appointed time, we are in the car park of Castel Rigone in the hills above lake Trasimeno, waiting to be picked up and delivered to La Rogaia. We were told it would be unsuitable for a large vehicle, and indeed, the gravel road is steep and narrow for a couple of kilometres before we arrive in the idyll that is La Rogaia. The scent of Lavender and Rosemary greets you as you climb out of the car and adjust to the spacious silence, only disrupted by the sussuring of cicadas or the melodic lines of a nightingale.

We meet Wolfgang who is a sculptor first and foremost, besides co-managing the courses at La Rogaia and occasionally teaching some of them himself. He leads us around his studio, introducing us to some of his current works. He’s in the final throes of preparation for an exhibition in the South of Germany. Many works have already been shipped off, but even from what is left over, we get an impression of his exquisite work with marble and other stones. 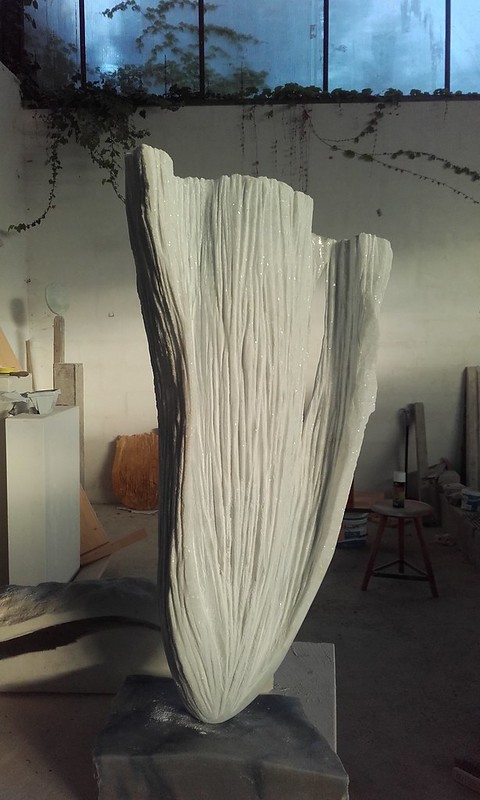 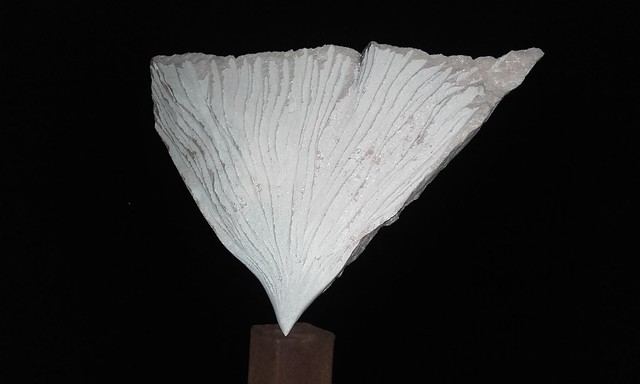 Next, we meet the Ornella the cook, a vivacious, fiery lady who is just putting the final touches to tonight’s dinner. We drop in on the tail end of a class, and are happily surprised to meet Antje and Toenjes, a couple who I’ve met and taught several times in Vis during the Summer workshops that Ines organises there. Last but not least, we meet Annette, the hostess who seems to run three full time jobs at once: Maintaining a huge property with a wonderful garden, raising several children, running a workshop centre and councelling local clients in her capacity as a therapist.

La Rogaia is a unique location – really far from the hustle and bustle of civilisation, set in a beautiful garden, which in turn nestles into Olive groves. I can imagine the benefits on one’s soul of staying a week here, enjoying nature and good food, of breathing in another rhythm and watching sunrises and sunsets.

The next evening, we are once again invited to another delicious dinner, followed by a trip with the group to a Milonga in Perugia, hosted by a very welcoming Lazzaro. There are not many people, but it is very friendly and has a good Ronda. I feel so happy when I get a chance to dance Tango

We decide to cover some distance so we join the motorway for a while. We see less that way and certainly have fewer adventures, but sometimes that can be a good thing, if one wants to make some headway.

As the sun sets, we roll into a campsite about 3km away from Assisi. We tend to avoid campsites, unless we visit a very touristic place or need access to the internet or a washing machine – in this case all three of these apply. Campsites are often full of the type of travellers we don’t really connect with, but in this case, the opposite is true: As soon as we switch off our engine, visitors arrive: we have Polish, Dutch and British neighbours and all of them pop in to admire Emma’s interior – the wood burner eliciting oooh’s and aaah’s once again.

Our polish neighbours have a son, Adam Walny, who is a puppeteer and they give us his book, a beautiful monograph about his work. We chat for a long time about our various children, their talents and courageous life choices for artistic careers.

There is something inimitable about Polish performing arts – it’s witty and gritty at the same time, raw and often very political, but on a personal, human scale. Although probably struggling just as much financially as in most other countries, it always seemed to me that artists in Poland have a much higher social status than in the UK. Looking at Adam’s book makes me remember the wild and wonderful times I had many years ago in Kraków, meeting Piotr Skrzynecki when I performed at the International Festival of Yiddish Music and Culture.

The next morning, we take the shuttle bus up to the city. I’ve been to Assisi once before, about 30 years ago, but I hardly recognise it, it looks so clean and perfect! (a few days later, we hear that it had been hit by an earthquake about 20 years ago and then comprehensively restored, which explains my confusion)

We walk around the beautiful domed basilica, dedicated to St. Francis, until we are both a bit ‘churched out’. Just as we are about to leave, a choir from the Azores starts singing in one of the chapels, so we stop and listen to the melismatic voices weaving into harmonies and drifting along the walls and ceilings of the church. There is a choir competition happening that day and we meet some of the other competitors walking around town. Unfortunately we don’t have time to hang around to hear them all as we have an appointment elsewhere later in the day, but it was fortuitous to hear the one choir practising in one of the most beautiful churches I’ve ever seen.

On our stroll through town, we get chatting to a German pilgrim. He’s been walking for 9 months now. He started off in Santiago de Compostela, following the Portuguese route in reverse all the way down to Southern Spain, where someone stole his wallet and passport. He went to the German embassy to ask for help but they thought that, as he’d managed to walk all the way to Southern Spain, he might as well walk back home too and refused to help him financially! Days later, his boss rang up and said if you aren’t home within 3 days, you are going to lose your job. As he didn’t have the money for a ticket back home, he decided he might as well walk on. So he went along the coast across Spain and France all the way to Italy and thus arrived in Assisi. He said it is no problem walking without money. He didn’t look like a beggar to us, he was young, fit and sparkly-eyed. Where to next? we asked. I don’t know, maybe Rome and then Napoli. We recommended him to continue on to Sicily and gave him 10 Euros towards a ferry ticket.

I guess every pilgrim will have their own stories, and I’m not a fool to believe everything I’m told. It’s neither possible nor would I want to check the veracity of this particular one. Whether true or not, it was an inspiring story of courage, of Letting Go. It gave me food for thought about my own need for security in parts of my life, and why I still need to hold on to certain things to feel safe. We parted from the pilgrim and his dog, each of us smiling for their own reasons. That in itself was worth 10 Euros. 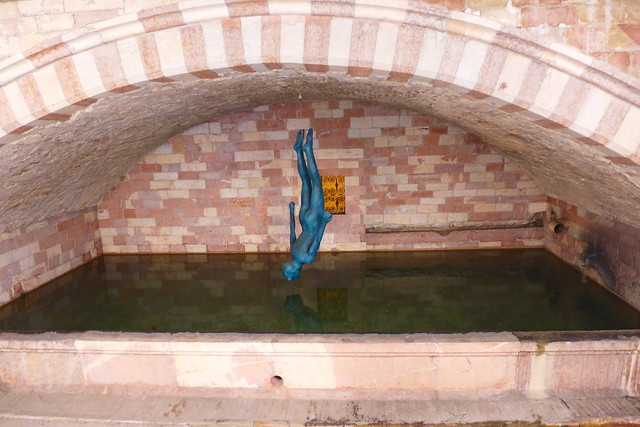