On our way down the Habkern mountain, we discover that the clutch pedal is not working properly. Frank has to winkle it off the floor with his foot every time he changes gear. Oh no! We’ve had this once before and it led to weeks in a Spanish garage waiting for a replacement clutch plate. But now as then, I’m not convinced it’s the clutch plate, I rather think it’s some kind of blockage in the pipes and this gets confirmed when we use our ‘phone a friend’ option and ring Walter, our German Mercedes mechanic in England. What’s more, he doesn’t think it’s going to harm us or the vehicle to continue on our journey, so we drive all the way to Staufen, a little town in Germany not far from the Swiss border. By the time we arrive the problem has literally dissolved.

Those who follow our blog regularly will remember Staufen from a chapter a couple of months ago, when I went there with Ines to teach a Tango workshop and we both were very impressed by this young and enthusiastic Tango community that also hosted a Bandoneon museum (I have a plan that involves Bandoneons – more of that later when it comes to fruition – and as we were passing through, I wanted to check out a few things). 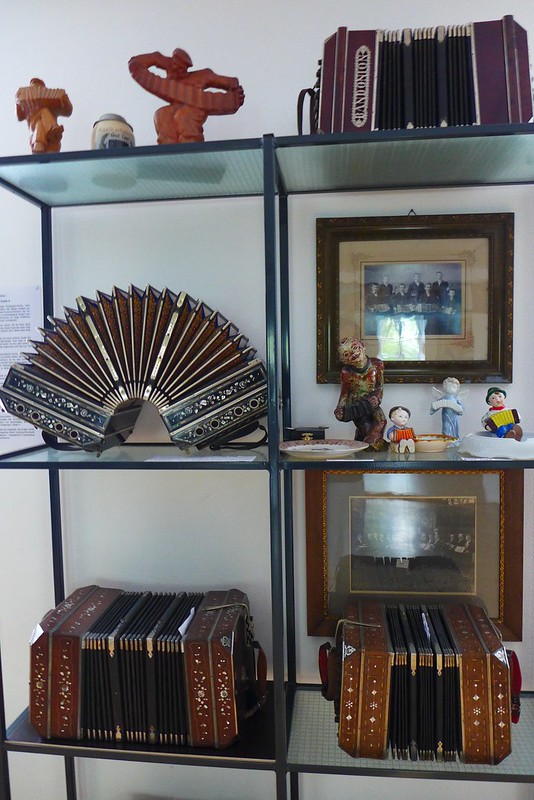 I like Staufen. Apart from the fact that it is a very picturesque old town, a lot of little things talk of a place where people enjoy living. We park up on the central car park, which has clear signs against large vehicles, and go dancing at the local evening Milonga. Nicole, our Tango friend, tells us that Frau Mueller, the traffic warden, may well come and talk to us. Sure enough next morning (at a respectable time, mind you), Frau Mueller knocks on Emma’s door. You can’t stay here, you are too big for this car park. We pleasantly chat for 5 minutes and she gives us info on where we can go instead, which is only a short cycle ride out of town, so no problem for us.

Our new car park is by a beautiful lido built over 100 years ago. A listed building, it boasts a 50mtr long olympic-size swimming pool and cute changing cabins by the side. There is a statue that speaks of its first general overhaul that happened in time for the 1936 Olympic games in Muenchen. Recently, funds for the pool dwindled and closure was imminent when a group of volunteers stepped in and kept the facility alive for everyone. It is open from May 1st for the hardy ones, so for 3.50 Euros we have the joy of going into pristine, ice-cold water. It was so cold that I couldn’t really feel it but my swimming slowed down on the second length due to my muscles seizing up! We felt really alive after that. 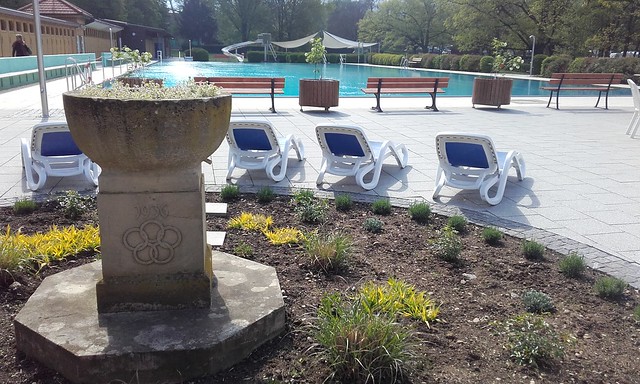 We cycle into town to sort out This and That…. on the way, we come past an older woman who is meticulously brushing leaves off the road outside her house. When we come back four hours later, she is still in exactly the same spot, still brushing, and I realise there is more to this than the need for a clean road. I imagine her there, brushing and brushing every day of the year and the people around her allowing her the space to do so without making her feel like an outcast.

Nicole lives in a little house in the town centre, in a part where people sit outside their houses on benches, enjoying the first proper warmth of the year, or outside the pub, having a glass of beer and a chat with a friend on a Friday afternoon before heading home for the weekend. 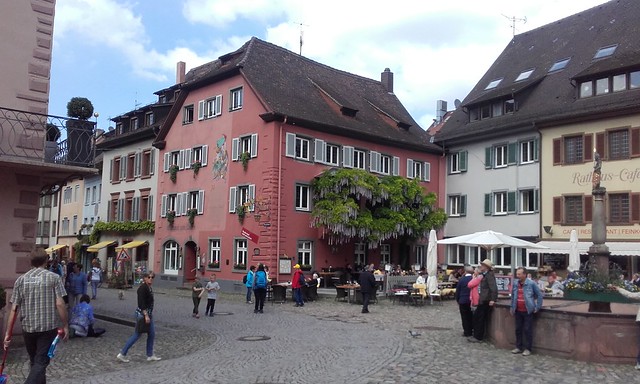 Staufen has leisure, enjoyment of life, an unhurriedness and an acceptance. The traffic warden could have treated us very differently, and people could treat the old lady with the brush very differently, but there is a ‘live and let live’ feel about the place.

It is almost exactly one year on from when Frank and I visited Habkern with Emma last, and much has happened since then. My brother, who then was very ill but still at home, died two months later, and shortly after that, his first grandchild was born. He’d so much wanted to meet his first grandchild (and what a lovely child he is!) that I just hope they met each other somewhere along the way – one coming and the other one going…

We have no plans other than catching up with everyone, so we hang out and talk a lot, we follow Karin and Rahel around while they go about their daily business, working in the garden or going on a shopping trip, all the while trying to catch moments when we can ‘help’ by holding Aaron

Little Aaron is a complete delight and it is a joy to watch Rahel settling into the role of mother while at the same time not losing herself. 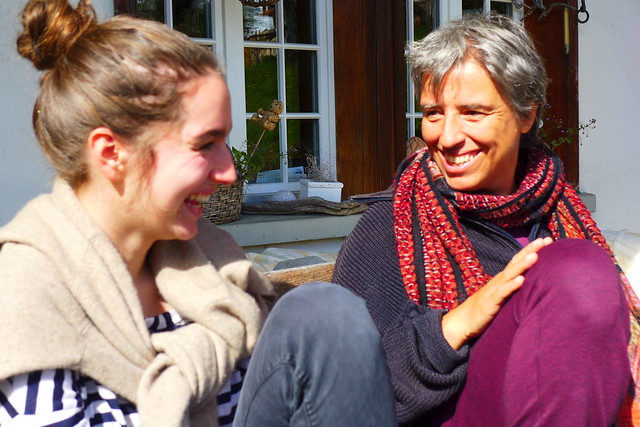 At night, we are joined by Klichko the cat who hops into our bed and wedges herself between us. So many things speak to me of the last few times I spent with my brother. We didn’t have an easy relationship all through our lives, but it dramatically changed for the better during the last year. I like to remember him like that – when he proudly showed me his garden or, once in hospital, when he talked about detailed plans of which flowers/vegetables to plant where. When he lay resting on the sofa in the living room, with Klichko purring on his chest, and we connected on a heart level without having to talk at all.

The house and garden in Habkern is a world in itself. It is beautiful and life has not stopped in the last year. There is of course sadness and a feeling of a hole, an absence, but also the will to connect with life, to grow, to change and develop.

Every time I’m in Habkern, I feel there is another channel of communication alive, in addition to the usual one of conversation. There seems to be a dream-like, subconscious level, in which I connect with people and the place, and I feel that especially Karin is actively present in that level. I can’t really pinpoint what it is, but it has to do with healing, nourishment, love.

Karin offers us to take some mint from her garden, so I prepare a pot for our hanging herb basket in Emma, taking a little piece of Habkern earth and plant life with us. In turn, we leave some traveller’s gifts with them – Orange marmalade and Sicilian olive oil.

After a few days of immersion in this nourishing environment and a mutual exchange of heart energies, we pack our Emma, bid a fond farewell and move on northwards.

We leave Bergamo mid-afternoon with the intention of finding a place to stop for the night as soon as possible. We’ve become a bit more choosy as to where we want to stop, as it needs to be somewhere that’s suitable for an outdoor Yoga session. Normally we do the Yoga first thing but this morning, the fishing competition interfered, so as we drive along, we keep an eye out for a parking place with a bit of green by the side. But there is no suitable space in sight as we wind our way from Bergamo to Como. We try a little detour off the main road, but this only leads us into incredibly steep hills and into Como through the back door. We then try to manouvre our way through Como and out the other side, which takes quite a while and following the signs seems to lead us rather round the houses, so that by the time we hit the motorway to head out of Italy, we are both tired and cranky. At the border, we need to fill in the forms and pay for the motorway toll. We are both so tired that we can’t properly communicate with the official, our heads a mess of different languages and our mouths not obeying either idiom. He just looks at us and shakes his head…

15km north of Como, just across the border into Switzerland, we turn once more off into the hills, following directions to a campsite. We arrive to find the barriers down, so we end up parking on a meadow just outside the campsite. We are both completely worn out from squeezing Emma through uncountable serpentine turns, navigating heavy traffic up and down steep mountains. It is rare for us to have to drive around 2 hours trying to find a place to park for the night!

The meadow is quiet and lets us come to rest. I am determined to do the Yoga, no matter how tired, and I find that doing just 20 minutes outside actually restores my energy very nicely, more than food or rest could have done.

The following morning, we leave early and after 4 hours of smooth driving, we arrive in time for lunch at Habkern, 1100mtrs up above Interlaken in the heart of Switzerland, where my sister-in-law Karin, my niece Rahel and her little baby Aaron await us. 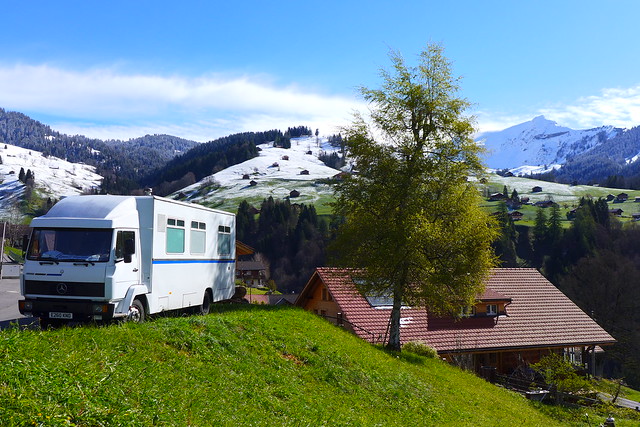