May
27thThe Poppy Fields of France

As we travel on north-westwards through France towards Calais, the land flattens out and opens up to large fields and forests. Every now and then we pass through a small town and in between we are on small but fairly straight roads. Along the side of the road, we notice more and more signs for war memorials and cemeteries – not just French but also German, American, Chinese, Canadian, British, South African, Australian…. it is a truly international scene that is represented here. We stop off somewhere in the middle of nowhere to watch a tank being off-loaded at a memorial location. 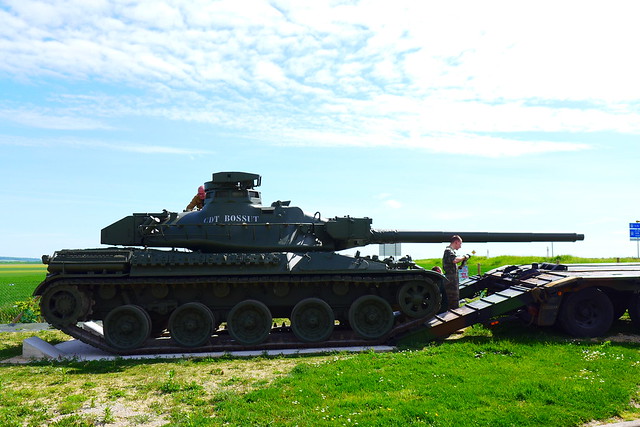 We wander around, reading the many panels telling the story of this place, how it was an important area, heavily fought over in both the first and second world wars. I look around. Fields as far as the eye can see, not even a house in sight. My mind cannot bend itself around the question of how so many men could be persuaded to fight against a people they didn’t know, on a piece of land they’d never set foot on before and in a country they had no connection with. When we were in Montesole, I could see why the partisans fought to the death: this was their home, it was mountainous, wild, beautiful and their families had lived there for centuries. But here, in Northern France? Flat countryside as far as the eye can see – I can understand a Frenchman fighting here, but why would a Canadian come and fight a German? I’m not talking politics, because of course that’s how it worked, but I’m talking about a heart-feeling. And it’s the same today, when British soldiers go off to fight in Afghanistan or elsewhere far away from home. Who or what gets people motivated to risk their lives in this way? Something in me cannot follow this line of thinking/feeling.

While we are driving through Northern France, I am also on an inner journey.

I am reading a series of books that my sister-in-law recommended to me, by Sabine Bode, who collected many interviews in Germany, researching the effects of war trauma and how this gets passed on down through the generations. For me, reading her books is like entering a cellar, the door of which has been kept firmly shut for many years. I recognise elements from my own childhood. The books mention a ‘fog’ that my generation and the after-war generation felt, a fog that prevented us from really enquiring when we were younger and that now obscures the memory of our childhoods. I remember how I tried to duck out from under a big heavy cloud ever since I was 7 or 8 years old, culminating in my decision to leave Germany and move to the UK in 1989. Bode makes a valid attempt at catching the inexplicable, retracing feelings back through the generations. I recognise various educational ‘methods’ she mentions, and I remember the strange volatile behaviour of my grandfather towards us children. I didn’t realise just how many of my personal childhood experiences were actually typical of my generation.

I remember seeing my mother under the direct influence of the strict and sometimes repressive atmosphere that came from my grandparents (born 1911 and 1914). If they came round for lunch (and as they lived nearby, this happened often), lunch had to be on the table by exactly 1pm – if not, my grandfather would throw a tantrum and storm off. This used to stress my mother considerably. Tantrums seemed to be the order of the day around meal times – as a 4-8 year old, my younger brother used to throw them regularly, usually culminating in him being dragged off to his room by my father, and the rest of the meal being conducted in silence, while my brother screamed and crashed around in his room. In my experience, my father was a peace-loving man, he rarely raised his voice and I only once saw him hit my younger brother, but he did have the idea that my brother’s choleric temperament was best cured by shutting him in a room on his own.

Dealing with my brother’s volatile nature took up a lot of space in our house and it was because of this, combined with the general sense of something heavy lying over the family, that I went my own way from very early on. I see this as a blessing. It gave me independence and a zest for life’s adventures. Even as a 7 year old, I saw the limitations of my home family and instead of fighting for it, I chose other households that gave me what I couldn’t have at home. I just chose another set of parents and siblings to spend my time with instead on those occasions.

Back to my grandfather, I remember that whenever we did ask him about the war, the stories he told were like fossilised vignettes, presumably those he thought we could handle, presented always with the exact same wording.

So much of our memory is coloured by how we respond to our environment though… Conversations with my older brother last year revealed that he’d experienced our grandparents’ home as a haven, as protective from the lack of emotional care he’d perceived from his parents. My experience of my parents and grandparents was diametrically opposite to his.

As the days pass, the books lead me deeper and deeper into the fog that I had chosen to turn away from so early in my life. One night I dream of a conversation with myself. I am split in two and one of me tells the other that I made a choice at the time and I still have a choice. I can look at this or leave it. The other me responds that there is a possibility that, by not addressing the past, I carry it with me and pass it on to my children. But, responds the first me, it is toxic material, will delving into it really bring me to a greater understanding or freedom? Is there not enough in the here and now to be attentive to?

Waking up from the dream, I think about the Here and Now. I think about those who are traumatised by wars today, and our inability as a group of nations that have war trauma still in living memory, to respond compassionately. We have so much space in Europe, we are so rich, why can we not share? Why can we not open the borders and help those in need? How can we stand by (especially the UK) and watch refugee children being further traumatised by drifting through Europe, unable to reach their families, due to border controls? And how can we leave orphaned children to their own fate?

After WW2, every second German was displaced. People describe this time in Germany as an ant heap, with everyone moving, in all directions. It was not only the time of war that left great scars but also the five years after, where hunger, displacement and loss of family left many people floundering and many children vulnerable to unchecked violence. Germany’s relative openheartedness, compared to other European nations, towards the current refugee situation may well have to do with the living memory of the time after the war.

Bode talks of the inability to heal trauma without an adequate grieving process. I suppose this is why we pass so many cemeteries of every nation on our way through northern France, each of them maintained by their respective countries. But what about these other memory spots, where tanks are displayed and the information boards make fighting sound like some exciting computer game. There is an element of glorification in this that makes me feel intensely uncomfortable. It is also partly the answer to my question above, of how so many men can be convinced into fighting.

There is much more to be said, but I feel a bit at sea with it all right now…

This chapter is unfinished and will remain so. Meanwhile, I will come back up for air. We are travelling towards Calais, we are heading for London to meet up with Lilli and the rest of the family, to be at her concert with the London Vocal Project.