At one end of the farm’s property lies a compound of traditional mud and straw buildings housing Lahsan, his wife and his mother, as well as four children aged 1-14. While the men go off to work on the various projects away from the farm, the women stay at home and I see them occasionally working in the fields or the polytunnel, but mainly they are in their houses looking after the children and making food for everyone, including bringing us a lovely couscous dish one day.

On the days that there’s no school, we see the older girl looking after the little boy and in the afternoon when his father returns, we see Ferid, the oldest child, helping him measure out the spots for the trees. We get to talk with Ferid, he’s bright and once we have his confidence, he’s quite talkative. He’s hoping to study something, maybe he’d like to be a doctor (although Omar tells me that last month he wanted to be an agronomist, so it’s not that fixed yet…

For Omar it is clear that Ferid needs to learn English to have access to internet knowledge. He asks us for some hints on how to teach him English. It is shocking but of course true, just how much English is the gateway to knowledge.

One day, we take Ferid away from watching cartoons to come with us on a cycle ride to the nearest shops about 3km from the farm. Along the way, we chat about this and that and he’s very willing to explain whatever questions we have and help us find the things we hope to buy, like Leben (a type of Buttermilk, maybe mixed with Kefir), which we like particularly if it’s Beldi (home made), but to find that you have to know where to look.

When we return, the mother and grandmother have prepared some tea and baked some bread for us. They insist we stay for some food. They scramble a few eggs too and make Ferid bring out chairs and a table and sit down with us. It’s lovely to see how they teach him to be a host – he’s the man in the house in that moment, as his father is out working. They literally make him sit down and converse with us. He is quite shy but he obliges and in the end I think he likes it, as it gives him a chance to practice his French.

We have noticed before just how strong the older women in the farming communities are, and how contented and happy. It shows in their beautiful faces. This family’s grandmother is no exception. When we leave, they grant us the rare opportunity to take a photo of them all. We take Ferid back to the farm with us and on our little portable photo-printer, we print out some of the photos for him and his family. 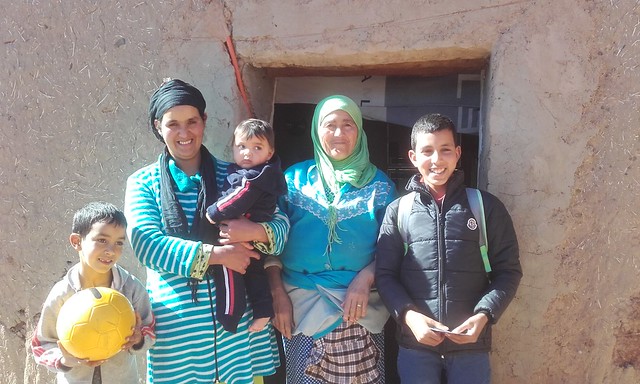 One day when we think we are all alone on the farm, we see an older man walking round the outside of the house – someone who from his gait doesn’t look like he’s a Moroccan. Frank goes out to meet him and it turns out it’s Cabou, the neighbour from across the fields, who’s come to look for Omar (although I think he might have also come to see who we are – he tells us he’s been observing our van for the last few days). He’s brought along a bottle of the most delicious home-made grape juice, which we ‘retaliate’ with a jar of Frank’s lemon and bergamot marmalade. He wants to know the recipe and the method… 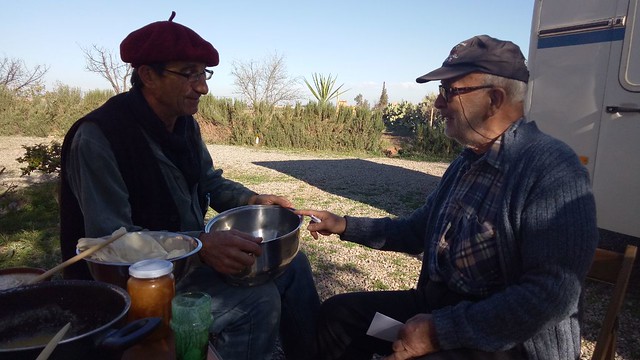 Cabou is a handyman, and as Frank is looking for a heavy metal implement to help him make the holes for the trees, the two of them go over to Cabou’s farm to get something. Frank’s gone for a couple of hours and when he comes back, his eyes are wide. Cabou’s house and land is for sale and Frank is dead impressed by it. There’s a house and adjoining it 8 rooms for B&B surrounding a court yard. A large piece of land lies behind the house, sporting an olive grove, a vineyard with 300 vines, as well as plenty of open land, bordered by a big barn at the end of the property. When Cabou extended the house, he used earth from the garden, digging a deep hole that was then to become a ‘Cave’ with a beautiful, vaulted stone ceiling. Cabou is in his 80s and he wants to sell up and move to his much younger wife’s family in Azrou, so that when he dies, she has the support and company of her family. On the other hand, he says, he’ll be also content to die here where he has happily spent the last decades of his life. It’s a win-win, and although he’s 83 years old, he’s sharp of mind, strong of body and with a bright sparkle to his eye, so I reckon it will be a while yet before he dies.

Later that day, we go again together, but I don’t take to it like Frank did, and I think he too has his doubts on second viewing. But it’s always interesting to see what people have created. Cabou is an inventor who used to work for Peugeot, and his place is full of ingenious practical details. He doesn’t shy away from experimenting, even if some things fail. It’s par for the course when being an inventor!