For a while now I’ve been fascinated by the construction materials of the traditional architecture. We’ve been talking about ksars and kasbahs, so here is a bit of an explanation of what they are:

A kasbah is a fortress building or a fortified part of a city, historically the home of regional rulers providing security from attack. Built with high walls and few exterior windows and often on hilltops to provide greater security, kasbahs house one or more buildings.

Kasbahs are found in many places across Morocco and date back several centuries – some having undergone significant repair but some now rather dilapidated – with a fascinating selection easily accessible in and around the High Atlas mountains.

A ksar is a Berber palace (or very large house), fort or castle (the term means “castle” in Arabic, although the European view of a typical castle may be misleading). The distinction between kasbah and ksar is marginal, both fortified structures containing one or more buildings, although ksars tend to be less grand than kasbahs.  Good examples of ksars are the Batha Museum in Fez (the sultan’s palace in the late-19th century) and the Glaoui Palace in Ziat. (quote taken from Naturally Morocco)

When you come across the more dilapidated kasbahs or ksars, the first thought turns toward using more permanent building materials, and this is what often happened here: a lot of the modern houses are built with concrete blocks and steel re-inforcement. However, the feeling of being surrounded by walls of bricks made of mud and straw is entirely different to sitting in a concrete box. 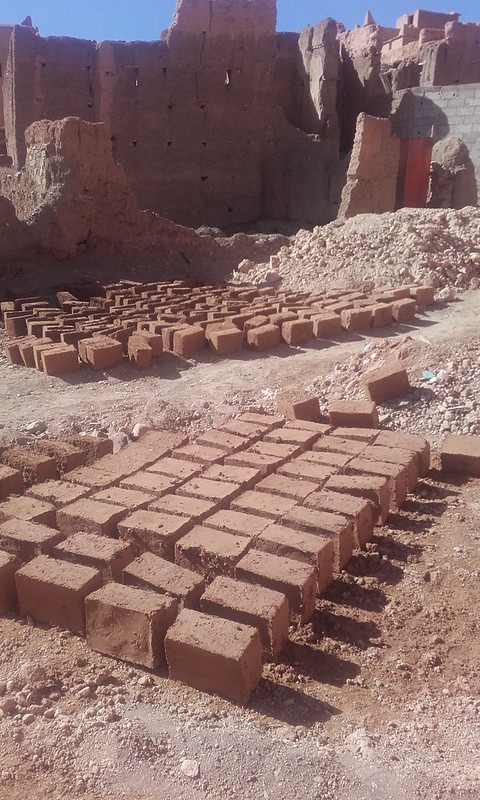 Moreover, I’ve been amazed at seeing really tumbled down kasbahs practically melting back into nature. After a few years of neglect, they just crumble and disappear without much of a trace. 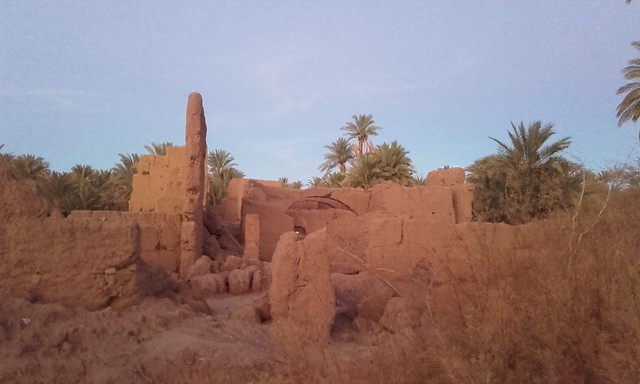 This is very ecolocigal. For a moment, I imagine a place like Totnes and what it would look like if some of the houses tumbled down. One would certainly not use the expression of ‘melting back into nature’ for many years, if ever! It seems strange to think at the building stage, of what a house would look like if it were to disintegrate, but maybe we have to shift our focus and give this aspect a higher priority when we construct buildings. Maybe its degradability, and its impact on the environment during this process, is more important than how long it will last. Thinking it through, of course this doesn’t just count for houses but for everything we create…

This is certainly a novel idea for a German mind!