Nov
3rdReturn to Roots (by Frank)

After a lapse of travelling, due to Covid and house renovation in Cardiff, I thought I’d pick up my pen…particularly as we find ourselves in East Anglia.

For me it’s been an extraordinary voyage of re-discovery – I was a boarder at a Grammar School near Ipswich from ‘57 to ’65. Most people, when I say I went to Boarding School, assume that it was a Public School. It was, in fact, state run and catered for an unusual mixture of inner-city boys (Londoners), sons whose parents were in the armed forces and the diplomatic corps and who had often been to 3 or 4 other secondary schools before ending up at Woolverstone Hall. 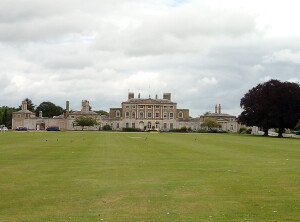 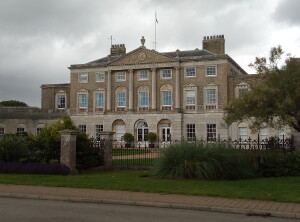 My dad lived in France and I was born in London, so I somehow fulfilled the necessary criteria. My other connection to the county of Suffolk, and indeed only a few miles from the school, was via a beautiful little village on the river Orwell, Pin Mill where, 8 years earlier, my folks were moored in an East Coast (Thames) Sailing Barge. 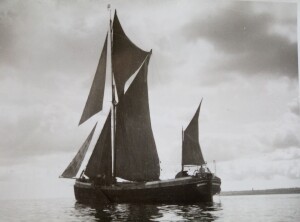 I’ll never forget, on the occasion of our first cross-country run from the school, when I recognised the shore line and announced that round the next corner we would see the Butt & Oyster, a wonderful old riverside pub. They either thought I was bonkers or psychic…The school later became Ipswich High School for Girls and on our brief visit I took a photo of one of their mini-buses, on the back of which was an aerial photo showing the ingenious use of Ha-Ha s, which by a series of stepped-down terraces, made the river appear to be at the end of the descending gardens…when, in fact, it was nearly half a mile away! 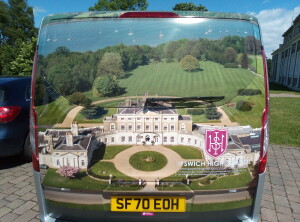 Later that week, on a visit to an osteopath in Ipswich, we parked up by the quayside and chanced upon a barge similar to ours and that could also have come from the grain merchant R & W Paul,   one of the only remaining old docks buildings nearby. 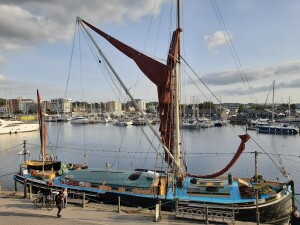 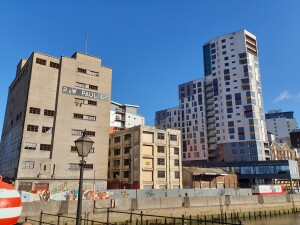 Like so many other ports, their original hearts have been ripped out and replaced with soulless wine bars and eateries. Extraordinary to think that boats like that had 4,200 sq. ft of sail and could be ‘handled’ by just 2 people, plying their trade up and down the East coast. It reminded me of one of my Dad’s favourite stories, when welcoming a Barge captain aboard The Serb, who was to guide us down to London for the first time. My Dad asked him where his charts were and got the retort ‘What d’you need them for, you keep the land to your right!’ What he failed to mention was that he knew every single sand-bank, tidal race and wreckage buoy on the way from Pin Mill to the Thames estuary…! From Hammersmith, we sailed across the Channel and were moored in the centre of Paris for a while. Sadly, on another cross-channel trip, she sank with my Dad s first exhibition of paintings on board – along with ALL our worldly goods….

As a kid, I’d covered a 15-20 mile radius of the school by bike, as well as being taken to many churches to sing and athletics, rugby trips to other schools in the area…but it didn’t quite prepare me for the huge landscapes, skies and varieties of architecture of neighbouring county, Norfolk. I would happily return to spend longer and discover more…