We had met Nanette and her husband Charles at the Fiesta where they had a stall with very delicious homemade things: power juices, energy balls, organic quiches, courgette salads etc. As we got talking to them, we discovered that they kept horses and organized sessions where one was encouraged to communicate with the horses in a non-verbal way.

We were fascinated and asked if we could come and visit and participate.

The day started with some pretty intense preparations and readings of our energy levels. It turns out that we both weigh in at 10 000 Bovi (that’s the unit for vitality – a healthy person normally has 8000) each. In fact, when the measurements started, we both sat quite close to each other, which seemed to confuse the measuring instrument, as it appeared to combine both our energies and consequently went off the scales. In any case, we turn out to be very healthy and vital, and relatively free of unwanted energies. Nice to know.

After a spirit cleaning session with elements of native American wisdom, Charles invited us into the horse enclosure. There was a small area roped off on three sides and the idea was to invite any one of the six horses into that area non-verbally. Charles stressed that it was very important to breathe in a similar way to the horses, ie. through the nose and from the belly. 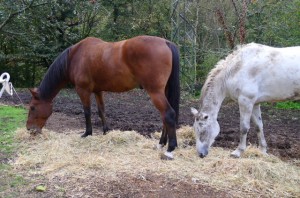 The first horse to respond and come into the enclosure was Elitaire, the alpha male of the herd and former Olympic show jumper (the brown one in the picture). A magnificent creature who immediately came very close. Charles said we should stand our ground and he showed us how to maintain our space and tell the horse not to enter it. Neither of us felt entirely comfortable with Elitaire, and Ruth felt a spikeyness in the connection. Charles explained how the horses are like mirrors of our inner state, how they pick up our emotions and reflect them to us. It was true, I had a bit of anger inside myself which Elitaire picked up on. As soon as he left the enclosure, he rolled in the field and got rid of the energy. The second horse came in with a much gentler energy and placed herself in between Ruth and Elitaire, creating a buffer zone between the two and diffusing the energy. 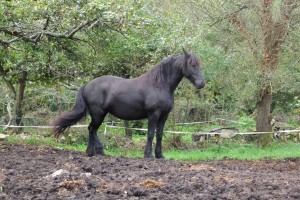 At this point, Charles left the enclosure, to see how we would cope on our own. The story went on, with various other interactions taking place, all very interesting.

It sounds like we were doing a lot, but we weren’t, we were just standing there while somehow a lot of unspoken stuff was happening. It was as if we were part of the herd, and the horses were including us in their interactions. It felt very different to any other experiences either of us had had with horses before.

After about an hour of this, we gathered with Charles and Nanette for a de-brief over a cup of tea.

All in all, a very moving and extraordinary day. Charles and Nanette really give of themselves from their heart and have a wealth of different skills in the field of energy work. On top of that, Nanette is an extraordinary cook. Her soups are incredibly tasty and her Gran’s apple pie is to die for.

We all got on well with each other, including with their daughter Sephora, and they extended their hospitality by allowing us to park on their land for three days, bathe in a lovely stream and collect chestnuts. It was nice that Frank was able to reciprocate their generosity with a massage for Charles and Nanette, which with their busy lifestyles (with 21 animals and a 6 year old child) they both appreciated very much.

For anyone interested in the work they are doing (Charles is also deeply involved in shamanistic healing ceremonies and Nanette does all sorts of things from readings to cooking courses), you can get in touch with them via the following link: Circulo de ArcoIris