We find two locations that offer Fado every night of the week – very evocative, sweet and melancholic songs, with two guitars playing accompanying arpeggios that leisurely tumble down, like the worn stairways and cobblestone alleyways of the city. Unlike in Lisbon, the Fado of Coimbra is only sung by men, by students and former students of the city’s university – mainly to serenade the lady there are courting, or to describe their student life.

On Saturday, we pass by a group of students on the main street, and they catch me to be the lady they sing to – one of the students wraps his cloak around me and they place me right in front of the group. 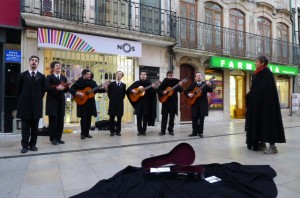 It is a strange feeling, standing there and being sung to by six men… next I get swept away by one of them in a happy dance. When we talk to them afterwards, we find out that none of them are music students. There is a biochemist, a few economy students and a mathematician.

The city is revving up to Christmas – there are groups of folk singers everywhere, in traditional costumes. They don’t really seem to care about an audience, they just sing to each other; maybe it is a contest of songs & singers from different regions.

There are a couple of free concerts advertised. The first one we go to is a Tango concert organized by the psychiatrists of the university hospital. They are lovers of Tango; one of them has been instrumental in bringing Tango to Portugal, another is a Tango composer. All performers seem to be amateurs, including the dancers who perform on a few of the pieces. The whole evening is a mixture of the bizarre and outrageous, some good, some bad but always a surprise. I take my hat off to all of them for having the courage to put something like this on stage.

I don’t know much about the organization that puts on these events, but it has something to do with raising the cultural level of Coimbra’s nightlife, to counterbalance the drugs and violence present in the city. Judging by the smart attire of the audience, I’m not sure though how the concert benefits the subjects of their philanthropy. Well, it’s keeping us off the streets anyway

The second evening is a concert in the main church in town, where we hear a professional orchestra playing an interesting selection of classical works. The conductor tickles the best out of the musicians. A very sweet trumpet player plays Hummel’s trumpet concerto, framed by a couple of Mozart pieces, one of them with a solo quartet backed by the orchestra, some C.P.E. Bach and to finish off, they are joined by a children’s choir who sing Jingle Bells – a cunning ploy to ensure a full house!

We strike up an interesting conversation with the conductor David Wyn Lloyd, who invites us to another concert and meal a few days later.

This one is aimed at gathering the philanthropists of Coimbra to hear about the various projects afoot in the city to combat violence against women. We recognize many of the people – they came to one or both of last week’s concerts.

The date for the event is the anniversary of the human rights declaration. The long line of speakers bring home the fact that there is still a long way to go to until women in this world enjoy even just basic human rights, let alone equality. The statistics for Portugal are brought home in an art exhibition in the entrance hall: 32 women who have died as a result of domestic violence this year alone in Portugal, and they are represented by little coffins bearing their names and a white flower.

There are about 100 people in the room, many of whom look very well-heeled. The presentations go on for a full 3 hours but hardly anyone leaves. There seems a real desire to tackle violence in this city. Frank and I listen very hard, trying to understand the gist of everything but only managing to grasp a few words here and there. . it is more like a 3hour Portuguese comprehension test but fascinating nonetheless.

A presentation of interactive theatre wakes everyone up: a short role-play of an unequal relationship is followed by an opportunity to put questions to the actors who remain in character throughout. Time is short, so the presentation doesn’t go into creating solutions and replaying the scene with a better outcome, but I think that is what would have followed. Last but not least, two artists and a composer receive a prize for work they have produced this year in relation to combating violence. David and his wife Marina, herself a professional pianist as well as a composer (it was her who won the composer’s prize), play three pieces of music. The acoustics in the hall are unforgiving, and the attention of the audience is low after 3 hours of talks but the music is beautiful and wins everyone over. Rachmaninov, Bach and Elgar on piano and violin.  We all leave on a high, if slightly frozen from three hours of sitting in this cold draughty hall.

For those of you who understand Portuguese, you can find the organization who put up most of these concerts on facebook

Some photos of our Fado experience are here on flickr

David, Marina and the classical orchestra of Coimbra can be contacted via their web site