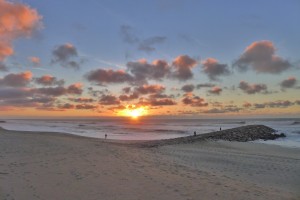 I’ve been longing for sand dunes and beaches, so we take a few days to explore the area north west of Coimbra. We’ve been told there are miles of beach along the coast there…

Indeed, there is sand, wind and waves as far as the eye can see. We stay a couple of nights at various beaches, watch beautiful sunsets and have bracing dips in the sea. It is too wild to go in more than knee-deep. Strong currents pile the sand up in irregular heaps, and breaking waves further out indicate sand banks along the shore. Waves are breaking against each other, and there is a strong pull out into the sea once the waves recede. Having spent all my childhood holidays by a sandy shore in Spiekeroog, on the north coast of Germany and watched people drown almost every year, I have a healthy respect for the power of the sea and make sure that we are safe. It all looks harmless enough, but I know very well that if you go in a few feet deeper, you can easily get knocked over by a wave and pulled out and that’s it – by the time help has been called it’s usually too late.

One night we stay in a forested part of the dunes in the middle of nowhere, on a road parallel to the sea. I’d love to get lost in the sand dunes for an hour or so before we leave  I say to Frank the next morning. So we set off. Mushrooms everywhere!!! If only we knew better which ones are edible. We err on the side of caution and leave them all behind. We come across an elderly couple who are ‘hunting’ mushrooms with special implements to dig them up. They are after the kind that only just pop their heads out of the sand, their fleshy stalks remaining hidden. One has to be eagle-eyed to find them!

Then we hear the sea, just behind the next few dunes – or so we think. After one hour of fruitless hunting for the sea, scrambling up sandy dunes and down through very overgrown forests, we come upon a huge sandy track, straight for miles, at the end of which we can just about make out the sea. So we decide to give up and go back home along the track, using the position of the sun as our guide. After about 40 minutes of walking along the track in the heat (and no, we didn’t even have water with us!), we come back out on the road, not too far from where we had parked. Phew! One should always be careful what one wishes for – and be precise! ‘an hour or so’ had turned into a good 2.5hrs.

Later that day, looking at googlemaps satellite pictures, we see that we had only made it halfway through the dunes towards the sea. Lucky we turned around when we did. But isn’t this impressive: this is a place in Europe where there is 40km of beach, in two uninhabited sections of 20km each, and you need to walk through about 8km of forested sand dunes to get there in the first place! I feel like packing a day bag and going there, but Frank has had enough of traipsing through deep sand and undergrowth for hours on end… 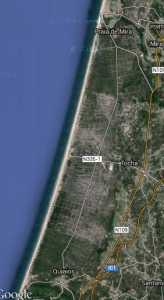