We’ve been worried for a while about where to park in Barcelona. We would like to spend quite a bit of time there, to see old friends, to go dancing and then for Frank to stay on and be visited by his son Dan while I go off to London to visit my daughter Lilli.

It turns out we needn’t have worried – as we are driving around Montjuic (a steep hill near the centre of Barcelona, where a lot of the Olympic buildings are) in search of a water pump, we meet a guy on a skate board who then escorts us, on his skate board, to a lovely car park with a water pump, overlooking the city. We have a few travelling neighbours, although they are less obviously living in their vehicles, which look more like removal trucks than campervans.

For a few days we have found our perfect home – near the centre, yet outside of it, up in the fresh air, surrounded by trees and grass. The water is of good quality for drinking and we hold our head under it too, to freshen up in the heat of the day. We explore the city on bicycles. The Rambla is flooded with tourists, and I’m missing all the street performers that used to be there – living statues, painters, dancers etc. There’s nothing anymore, except a few musicians on the metro in officially designated spaces. We discover a music shop of the old style, the Casa Beethoven. One of the last of its kind – you can ask for any obscure sheet music (such as a bandoneon study book), and they guy who runs the shop will know what you are talking about, whether he’s got it, or anything similar, and where it is stacked on his many shelves.

Montjuic has its own atmosphere and places of attraction. Near where we are parked is a tunnel that is used by climbers, almost 24/7! They’re a really nice crowd, relaxed, friendly and quiet. 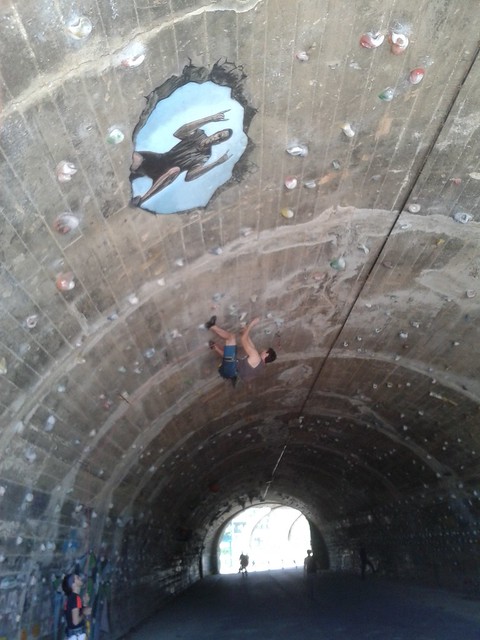 One day, we meet with Maya and her daughter to spend the day playing in a park near the funicular, dancing around the pond, playing sleeping beauty and looking for frogs amongst the Lilypads. Another day, Jim comes up to Montjuic to meet us and we spend a few hours walking around, ending up in the cemetery that overlooks the industrial port. Jim is a great raconteur and Frank a great cook, so we share food and many a good story.

Some of you have commented on how everything on our journey just seems to flow smoothly and we only have fantastically positive experiences. Just so you don’t get too envious, we do have our fair share of trouble and worries …

Being in the city presents its own challenges. Within the space of the last four days, we got robbed, with Frank’s purse and bank cards being stolen and an attempt being made at getting money from his account (we were pick-pocketed a second time too, but we were wise to it and had nothing but tissues in the pocket that was fleeced), my computer broke down for the second time and we had a note from the police, demanding us to move on, plus a fine may be waiting for us upon our return to the UK.

I guess we try and make the best of all experiences.

With regards to being robbed, Maya says you haven’t been to Barcelona if you haven’t been robbed – it happens to tourists and locals alike. We are lucky that we almost instantly discovered it and managed to cancel the cards before further damage was done.

Being moved on by the police is a bummer – we had found a really lovely place in Montjuic, away from the hustle and bustle of the city but within walking distance of the centre. Now we have to start searching again – and it’s not easy to find something. In fact it is forbidden to park with a campervan in the whole of the city, except for in designated spaces and they cost a minimum 30 Euros per night!

After a few days of struggling with the computer, this morning we managed to get it going again, once more with the hard disk removed and connected from the outside. It feels like it’s had a heart bypass (for the second time), but at least it’s working!

The biggest challenge for me is to learn to let go of needless worry about loved ones, to send strong loving energy instead and to trust that all will be as well as it can be for them. Out of sight does not mean out of mind; we participate emotionally in the lives of those close to us to the same extent as if we were at home – or possibly more, the mind being free to roam more than if it was preoccupied by a daily job.

We decide to leave Barcelona for a few days, to get out of the way of the police who deal with the various festivals that are going on this weekend: There is an AC/DC concert in the Olympic stadium just up from where we are parked, there is a big music festival down by the port and there is a big football game on (Copa del Rey) and the town is flooded with fans from Bilbao, who join the thousands of Barca fans in an unusually friendly way. The parties go on until dawn… Today, Barcelona has a headache…

Driving Emma around a busy city with narrow streets can be quite scary sometimes.

Our attempt to leave Barcelona by the back door is quite an adventure: We get lost in miles and miles of suburbia (or did we drive around in circles?) until at last, we end up in the national park behind Tibidabo, about 20km outside of Barcelona. We draw up by an old church and cemetery and spend the following day resting from the hustle and bustle of the city, catching up on the internet and eating the mulberries that drip from the trees under which we are parked.

We return to Barcelona via a little windy road that comes out at Tibidabo. it was quite scary to see how hordes of motorcyclists used it as a race track! 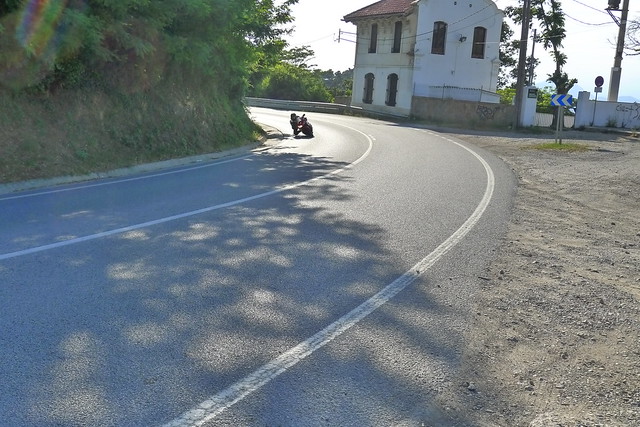 The following day, we spend another hour or two driving around the outskirts of BCN, trying to find a suitable place to park for the night. This time, we find a very rich part of the city, with leafy, quiet streets. We find out the next morning that we are parked up next to a large cosmetic surgery clinic! There is a beautiful old tree on one of the roundabouts. Perfect place to sit and contemplate! 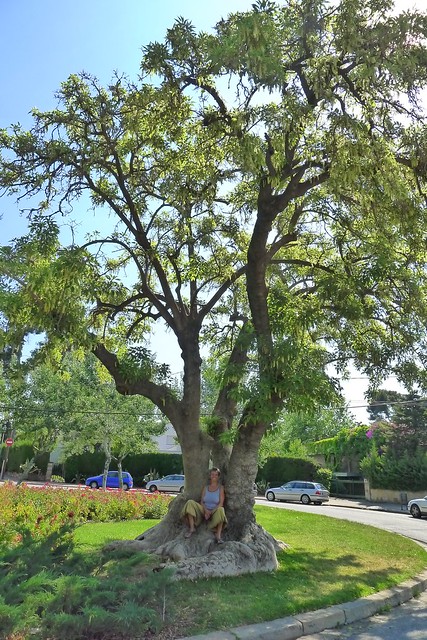 Wherever you stay in Barcelona, you will never be far away from a rubbish container, which means you will be woken at 3am by the collecting lorry. But this night takes the biscuit, as they decide to have their fag break right outside our van, leaving the flashing lights and the motor going for 15 minutes! You’d think it’s not such a big deal to be woken at night, but if it keeps happening, it does sap your energy.

The following day, we make another attempt at finding a place. We are drawn to go back into the area near Montjuic, as we liked the Mercado de la Marina and its surrounding neighbourhood. We find a wide, shady street where we can park, just opposite Café Praga, run by a very friendly Chinese couple who tell us we can use their internet from our van after opening hours! 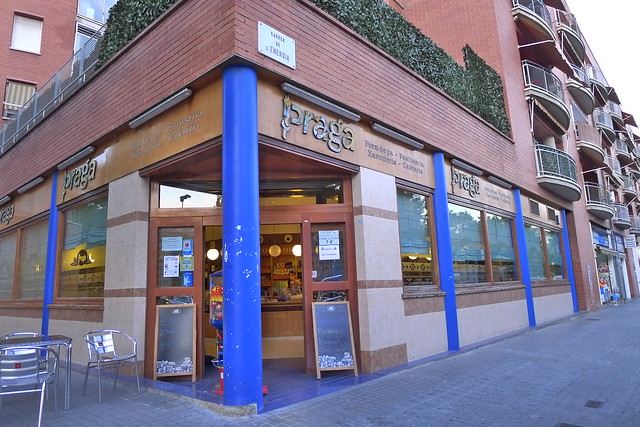 I decide not to be so intimidated by the city vibe, and I open our door to the pavement, just like I would do in a little town or village. We greet everyone who passes by and make conversation. Instantly, the feeling changes, and we find out that this neighbourhood is indeed like a little village where people know each other. We have an animated conversation about local politics with an older woman who pushes a zimmer-frame with her little dog sitting in a basket in the top. It is lovely to find people who are friendly beyond a surface reaction, like the Chinese couple from the Café, or the woman with her dog.

It is interesting how our status changes depending on what people see of us. Our identity seems to be quite fluid. If we are just in the van with the door open, people will speak to us and enquire about our honeymoon, or be curious to see the inside of the vehicle. If on the other hand, we are having a meal, they tend to hasten by, not even returning a friendly hello. If we wash our clothes at the nearby pump, we sink down into another level of society entirely, and people will start to regard us with distrust.

Here are a few more photos on flikr