One evening, we find a parking place on the other side of Granada. We park up next to a mobile home on an otherwise empty car park. Next morning, we meet our neighbour Luca, a very quiet and friendly Italian. Luca tells us a story that almost sounds like it’s out of the Tales of the Alhambra:

Outside a little village just west of Granada, there are some olive groves where every now and then people have found little bits of gold in the fields. One day, a company got wind of the story and thought there would be a treasure to find if they dug deep. So they bought a large area and started bringing in big machines. They dug deep down, looking for the precious ore, but didn’t find any. Then they thought they might dig a bit deeper and find oil instead, so they got themselves another set of heavy machinery and drilled down even deeper, but all that happened was that they hit on some hot springs which started to bubble up and make work difficult. After years of prodding the area, they decided there was really nothing there for them, so they finally abandoned the project and upped sticks and left, after fencing the whole area off.

But the hot water kept coming out of the ground. After a little while, local people found out that there were thermal springs to enjoy. Soon, the land was inhabited by young people, mostly travelling folk, who just tore the fence down and moved in. Police tried to intervene, but nothing much can be done about it unless the owner of a place hands in a complaint. The fence went up a few more times, only to be torn down again. The original owners, a big international company, were nowhere to be seen.

If the owners had had any business sense, they could have capitalised on the thermal springs and created a hotel complex around it. They couldn’t see the treasure they had discovered because they were looking for another.

We like Luca and we hope to see him again. Maybe we will visit these hot springs, but currently we are advised to stay away, as there is a ten day long techno rave going on there.

We meet quite a few people from the alternative scene in and around Granada, and we park up outside a circus practice space some 15 kilometers South of the city. We offer Tango, Mime and Massage in return for other things. Barter – trueque, as it is called in Spanish – is such a nice way of coming in contact with people and it is so much richer than when money is involved. Besides many good conversations, we have a lesson on Flamenco rhythms and how to clap them, I learn to lie on a slack rope, we have a Hula-Hoop lesson and a haircut, we are fed, we can wash our clothes and use the internet, and someone cuts us two bags full of fire wood.

One afternoon, we visit Irene the flamenco dancer in her house a few kilometres up the hill. She and Martin cook us a delicious meal, and they are adamant that Frank and I are not to help with preparations but instead go and explore the ‘garden’ – which in fact are quite a few acres of olive and fruit trees. We climb down some steep banks through the olive grove, past a very friendly if quite skinny horse, to the bottom of the valley where we find a babbling river feeding one of the Moorish water systems. We go for a swim in the icy cold, clear water and sit quietly by the river in the dappled shade listening to the many birds of this valley, admiring the white lofty hills of the Sierra Nevada in the background. This is a magical place, and Irene’s eyes light up when she tells us of her projects for this property, which she bought half a year ago. She wants to restore the glorified shed in the garden to make it habitable for someone and create a space for another person to have a caravan on a flat piece of land near the house. She also has plans for making a dome as a meeting space and a place where she can give lessons and practice her healing arts. She wants to connect with the older people living nearby, so she can learn how to tend to the many plants on her land and how to preserve the fruits it yields.

After a leisurely meal we chill out a little, listening to Martin’s flamenco-inspired guitar playing, before returning to the Circus building for our Hula-Hoop lesson with Carmen. She has a great way of teaching, relaxed but focused, it’s a structured introduction to some fun things to do with a hoop. Like so many body disciplines, it strengthens the core muscles and sharpens coordination. Get in touch with Carmen if you are interested in a lesson.

The following day, Frank gives a couple of massages and we share a very tasty Paella cooked by Matthieu before we leave for Granada. Tonight is the night of the Gypsy procession and some of the circus crew are going too, so we’ll meet and experience it together. It’s a shame that Irene has left to visit her family in central Spain, because she has friends among the gypsies and would have been able to introduce us to some of them.

To find out what Irene is doing in addition to singing and dancing flamenco, check out her blogspot, and here are Victor’s contact details, in case you would like to learn how to walk the slack rope ( or just lie on it). Or if you need a fab new haircut, get in touch with Alice! 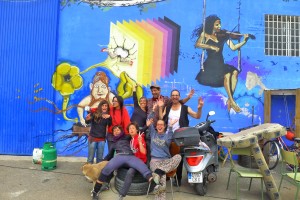 Here are a few photos of the picturesque front of the circus building.