Apr
25thGovernment decisions. The good news and the bad news…

We take a day trip to Almeria in order to pick up a parcel from the post office there. Almost immediately upon leaving Motril, we are surrounded by what we call ‘the sea of plastic’. It’s over 100 km from Motril to Almeria, and, except for a few kilometres where the road goes through very rough and rocky mountains, the whole area is covered in greenhouses as far as the eye can see. 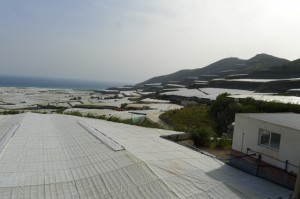 It is shocking – this is the result of our need to have fresh vegetables, tomatoes, aubergines, peppers, lettuces etc. every day of the year. In timely fashion, someone posts this article on facebook only days after we have passed the Sea of Plastic. The human cost described in it is deeply shocking. In addition to that, we wonder what happens to water. We are told that water gets mixed with chemicals before it flows through to feed the plants. We dread to think what comes out the other end. Also, the sheer amount of water needed to feed all these greenhouses must mean that water is lacking elsewhere. Thirdly, any rainfall does not get absorbed by the earth but just runs off the plastic into the gulleys and down to the sea, probably bringing with it a hefty amount of chemicals. Fourthly, such a large area covered with plastic would also affect the local climate. We heard from Miguel that chemtrails are rife in the area, and we wonder whether the government has to influence the weather because otherwise there wouldn’t be any rain anymore at all, as there is no water to evaporate. Everything about this seems so wrong. Last but not least the implications of using so much plastic… another article appears on Facebook, discussing whether it is time to rank plastic as a hazardous substance.

Between the sea of plastic and the Mediterranean is a small strip of beaches and holiday hotels. Just like they say in the article, the tourists who come to roast on the beaches have no idea what’s going on just a few hundred metres behind their backs. It really is shocking.

We wonder how much of this is local government policy. To the right of Motril, there are hardly any greenhouses visible, and in the area around Orgiva, which is only 30km away, there is nothing of the sort. We also wonder if damaged land like this can be reclaimed, and if so how, and how many years would it take for the area to recover.

We pass a sign for organic growers. However, they may well be operating on a huge scale, and apparently are just as liable to exploit their workers, if not quite so drastically as to spray them with chemicals. The organic tomatoes we find on our supermarket shelves in England don’t tell us anything about the conditions under which the people had to work…

The good news is that in other areas, local governments seem to have had their heads more screwed on about how they would like their area to develop. Orgiva has an incredibly beautiful ‘Ruta de Olivos’ letting people see these Olive trees that are hundreds of years old. We pass one farmer on a little three-wheeler put-put with an inbuilt, flatback trailer. He is full of pride when he tells us where the biggest trees are, some with a circumference that even 5 people can’t stretch their arms around, and that they are so old that his grandfather who is now 90 years old remembers them as big old trees in his childhood. We walk through lanes where the only sound is that of the water from the Azequias and the singing of birds, where Orange blossom permeates the air and the rich colours of poppies, Roses, Lilies and many wild flowers delight the eye. People use the land beneath the olive trees to grow beans, leeks, greens, lettuce etc. There are many houses dotted about the place, each house having a bit of terraced land with it. There is no one great big enterprise with fields stretching on for kilometre after kilometre. 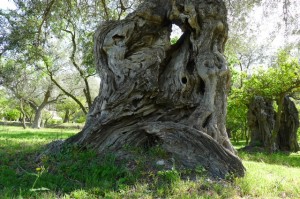 We take Emma up the mountain from Orgiva to visit a little village at the top, called Capilleira. We park by an abandoned municipal building that looks like it might have been a youth hostel some time ago. When we ask the locals, we hear that almost as soon as the building and its surrounding garden and swimming pool were built, it was shut – for no apparent reason other than lack of money. It is a beautiful spot and it hurts to see so much public money having been spent and such amenities falling to ruin. The swimming pool has never been used by anyone else than frogs who hop on and off the ladders to get in and out. A local farmer tells us that for one year, the place was run by some people who held a course there about herbal medicine. They build a greenhouse and planted many medicinal herbs in it and in the garden. But at the end of the year, the course closed down, and local shepherd allowed their flock to graze on the land, thus destroying the carefully designed garden.

We wonder what happened here. Was there someone in the local government who had drive and started a project, only to be replaced by someone who had other priorities?

So much local public money has gone into this, and nothing comes out of it – why does the local population not complain more, why don’t they take initiative? We think back on our visit to Chaos in Portugal, and how a similar project could thrive here too, but of course it would need the vision of someone in the village and make it a project that would benefit the whole community. 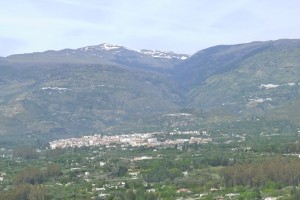 The town of Órgiva in the foreground, further up in the hills Cañas, Pampaneira, Bubión and Capilleira, and the Sierra Nevada, still partially covered in snow, in the background.

For more photos, including the beautiful ancient Olive trees, go to flikr.