You may have been wondering why, after two years of regular posts during our journeys, this year there has been a roaring silence…

Just to allay your fears, Frank and I are alive and kicking, still as madly in love as before (or even more, if that is possible) and we’ve had our usual share of ordinary and extraordinary travel adventures.

I’m not quite sure what exactly has silenced me, but I do know that I am still nursing a broken spirit from the Brexit decision and the effect it has already had on my life (those on Facebook might remember my post about this). I know that it has affected my joy of communicating with people and about people and places. Catching up with current affairs on the odd occasion that we are connected to the internet re-opens the wound too, every time. I know I shouldn’t let it get me down, I know we all need to stand up and fight against negativity and isolationism, against the closing of borders and the rise of xenophobia. I know every voice counts and so I will continue to try and raise my voice, but somehow it’s hard.

Ok., now that I’ve coughed this one up, maybe I can tell you about where we are…

It is the middle of the night and I just woke up from a stirring dream. While I slowly resurface from dream world, I do our usual exercise of trying to remember in detail where we are parked up. Tonight it’s quite easy – the constant rushing sound of the sea is a give-away. We are on the southernmost tip of Sicily, one of the southernmost points of Europe in fact, where two seas, the Mediterranean and the Adriatic, meet. There is a land spit that you can walk out on where you have one sea on the left and the other on the right, straining to get to each other with only four metres of broken jetty in between them, like lovers trying to get to each other, and then you climb up on a little rock and you see the waves from two directions crashing against each other, two different blues mixing. Tonight, the reflection of the full moon on the breaking waves gives the ocean a mysterious luminosity. 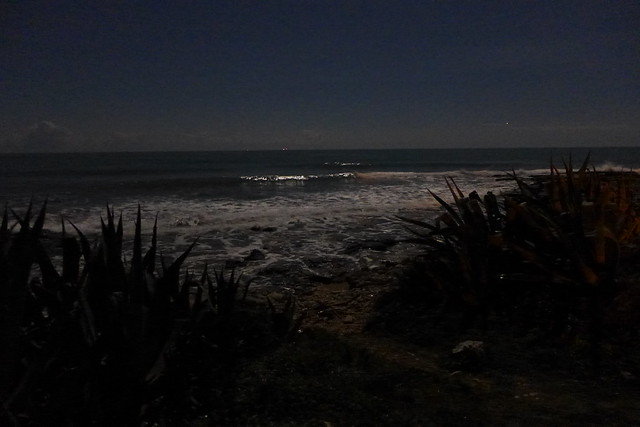 There is a little posse of camper-vans and other interesting vehicles, parked up on the actual rocky headland that, for once, is beautifully free of rubbish.

Yesterday we had a quick dip in the sea, the weather being like an English mild summer’s day and the water temperature also not far off British summer temperatures, I guess. The layout of towns and points of interest along the coast lets you imagine the throng of tourists that no doubt crowd the streets and beaches in the summer, but now it is beautifully deserted. Yesterday, we visited a little fishing village called Marzamemi, strolled through some lovely old streets and open squares, across big flagstones, hewn from the rocky sea. Later, we moved to the harbour of Portopalo where we hoped to buy some fish direct at source. The fish arrived late, so I took out my violin and entertained those waiting 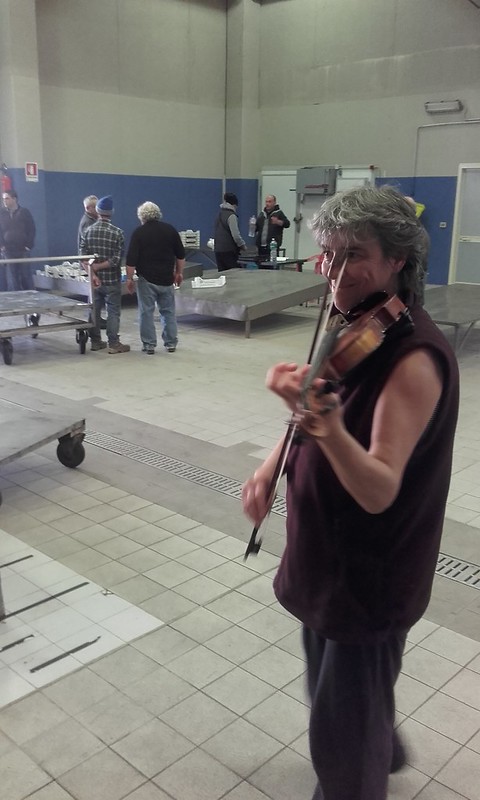 When it finally arrived, it was sold by the box, so we didn’t get any… never mind, it was worth just watching the fish come in on little rowing boats and then bought by restaurateurs etc. 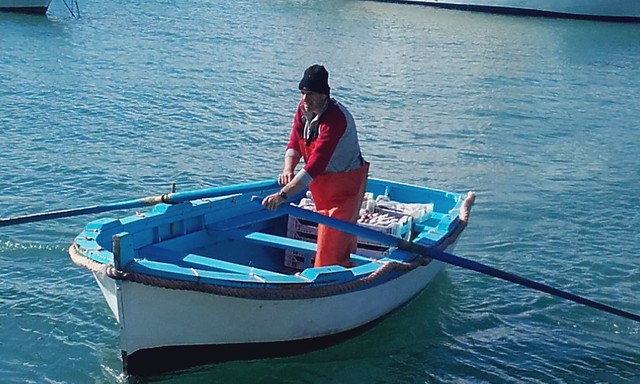 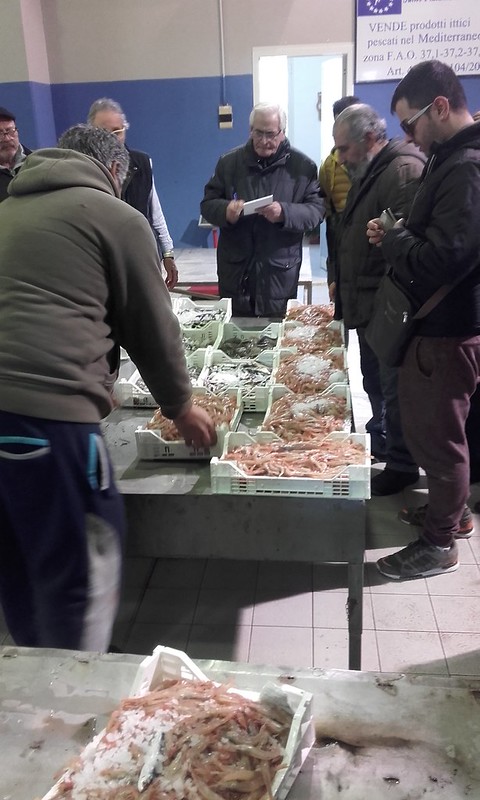 We’ve spent about three weeks in an organic farm not far from Noto, a beautiful Baroque town in the South of Sicily. Our trusted navigator called Serendipity brought us there: A scary tyre blow-out on the motorway (luckily it was one of the twin back tyres, so apart from a very loud bang, we didn’t notice any difference in the driving), took us to a large IVECO garage the following day. It was a very friendly family business and despite being extremely busy, they managed to order and change a tyre that afternoon! On the way to the garage, Frank had noticed that the adjoining property had very happy looking lemon groves, and sure enough, it was an organic farm. As we were on the lookout for bitter oranges, once we had all tyres back on, we turned into their driveway. After 200 metres trough lemon groves bordered by olive trees, we got to the house and met a family running an agriturismo biologico. Our request for bitter oranges quickly led to an invite into the house where we got talking. Darkness set in, so it was decided that the picking of bitter oranges would have to wait till the next day. Laura and Salvatore, who run the farm and the B&B invited us to park up for the night – and while we are there, why not join the family for dinner? The food is exquisite, and in conversation we find out that Salvo has a longstanding wish to learn English, so we agree to stay for a few days, teach English in return for food, and to give Frank the opportunity to make marmalade with organic fruits. A few days turn into a few weeks… Frank falls ill with a nasty flu virus, so the marmalade has to wait a while. We are treated to most delicious lunches and dinners and Salvo’s English lessons take us on walks around the farm. 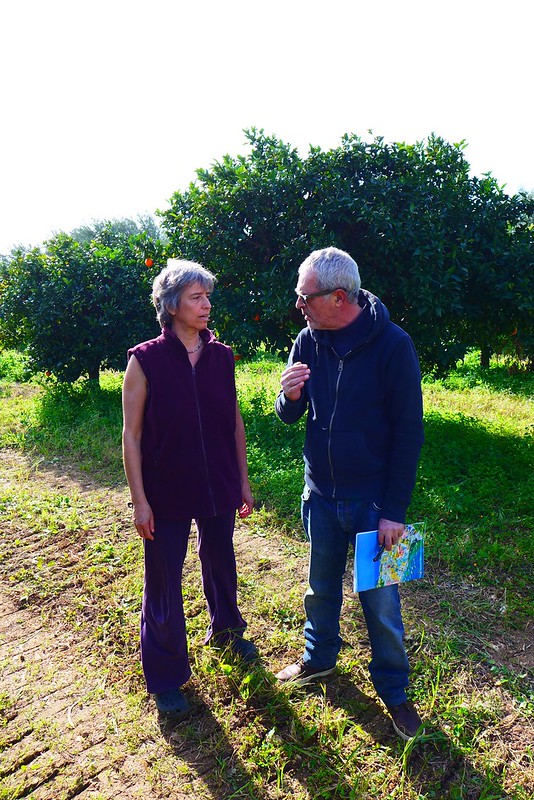 While he learns English, I learn about the production of lemons and oranges, about grafting and the almond blossom. I have never met anyone so passionate about trees – although there are 5000 lemon trees, 1000 orange trees, 500 almond trees, 300 olive trees, 20 carob trees, 2 walnut trees and several other fruits like mulberry and medlar, Salvo knows every single one of them intimately and has planted or grafted many of them himself. 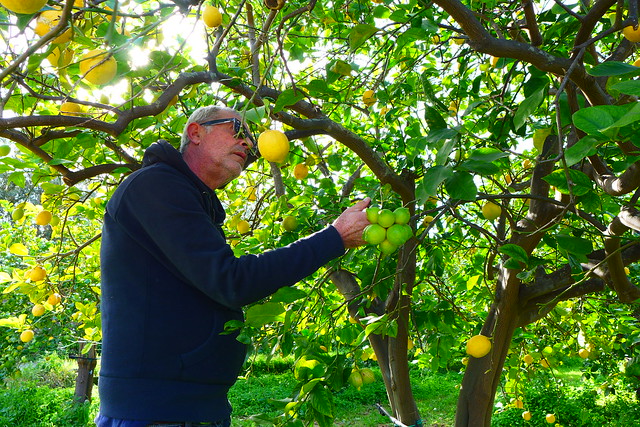 As you know from previous chapters of our Sicily adventure last year, the topic of rubbish is the Achilles heel of Sicilian culture. On this farm, called ‘A Lumìa’ (Sicilian for ‘Lemon’) we thankfully find that there is an awareness about not leaving plastic rubbish strewn about the place, so it looks clean and tidy. However, can you imagine, even though they are an organic farm, they don’t have a compost heap!

So we start talking about the joys of composting. This meets with a less than enthusiastic response but since we are there for a few weeks, we keep going on about it and eventually they let us build a structure. On the last day of our stay, we get them all together to explain the layering of kitchen waste and garden waste. It feels strange to be explaining this to people who have worked all their lives on the land, like teaching your grandmother to suck eggs. 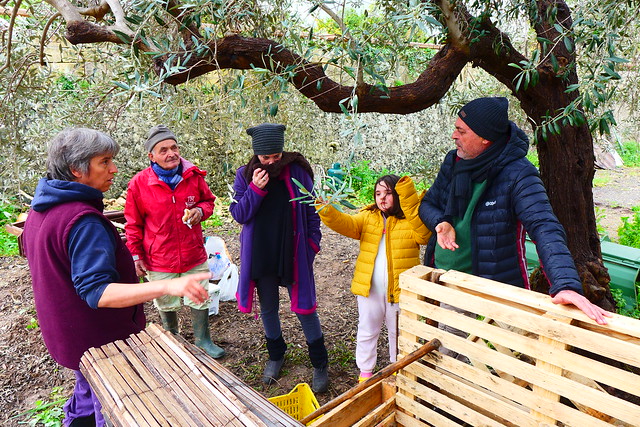 Pepino, now 76 years old, started to work for Salvo’s grandfather at age 14! He’s still strong and nimble, working in the lemon groves and also generally about the place. He’s not convinced by this compost malarky – what’s the difference between this and just throwing the kitchen waste under one of the lemon trees?, he asks. I explain that the rotting processes in a compost are different, due to layering of kitchen waste with green manure from the garden in a confined and sheltered place which creates heat that helps the composting process, and besides, the earth can then be used in the garden. He’s the one who will be in charge of bringing the kitchen waste to the compost heap, so we’ll see if it will actually get there… with a cheeky twinkle in the eye he says to Salvo, ‘and what do I do with the plastic bag once I’ve emptied the compost onto the heap? Shall I burn it?’ I know he says it as a provocative joke, but unfortunately it is the reality pretty much all over Sicily: the way to handle plastic is to burn it – out of sight out of mind, but into your lungs and onto the earth and the fruits…

We’ve had a wonderful time at A Lumìa, joining into their daily rhythm, sharing food and stories, exchanging English lessons and a massage treatment, and Frank makes over 50 jars of marmalade! Every morning just after sunrise, I take my violin out and go on a musical stroll, practising my Scottish and Irish tunes, playing to the workers or simply to the lemons and the almond blossom, watching Noto turn pink in the distance as the the sun alights on it. On the way back, I usually meet Helena, the vivacious home help and right hand of Laura, on her daily walk, accompanied by Lulu the fluffy stray dog that has found a home at A Lumìa, and hooking arms with Angelina, Laura’s 94-year old mother. Helena and Corrada help running the B&B which by all accounts gets so busy in the summer that no-one has even time to scratch their heads.

When the 50 jars of marmalade are made and the compost structure is up, we feel it is time to leave and set off on our journey around the island. The family is sad to see us leave… Giulia, the 9 year old daughter, says ‘ but you can’t leave, my dad hasn’t finished learning English yet!’ Well, I’m sure we’ll see each other again some time somewhere and we’ll stay in touch, but for now, we want to go and spend time by the sea, hear the sound of rolling waves and explore some more of this beautiful corner of Europe. 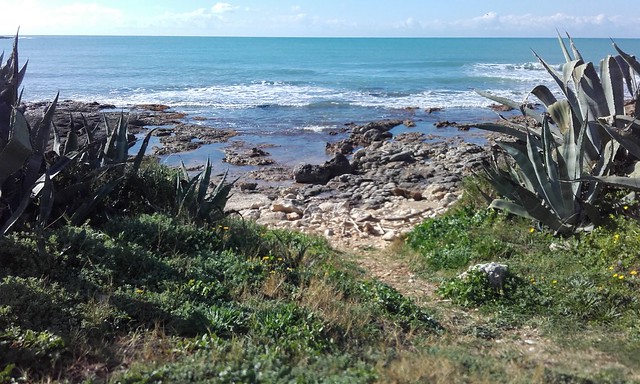 Oh, and last but not least, we have some happy news: our lovely trusted Emma, our home on wheels, has had a little baby, born in a little village in Sicily… 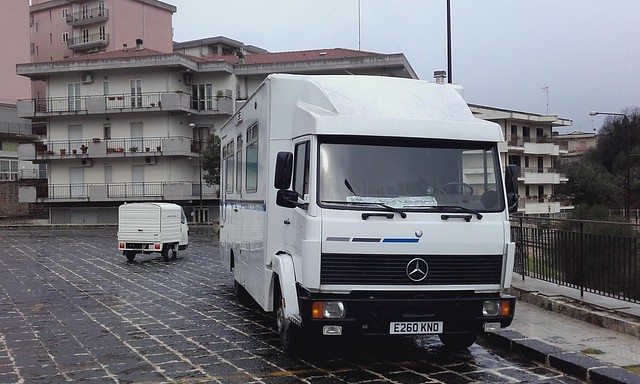 For more photos of this chapters, including a lemon harvest, click here