For a whole week, Granada is dominated by the sound of drums and the smell of incense. Over 30 processions cross the city in the space of 8 days. It must be a logistic nightmare to organise all this, but the Granadians seem to take it in their stride; buses still function, just along a slightly different route, and there is a minimal show of police, considering the huge amount of people participating and watching, and the number of roads that have to be blocked off.

Frank is not very well, so he misses all but the last day, but I venture into town with a circus friend to experience the procession of the Gitanos late on Wednesday night. We arrive at midnight in Sacromonte, bobbing along with the crowd up the hill to find a vantage point from which to see the procession. Sacromonte is like another world from the rest of Granada. The magnificent houses from downtown have given way to caves dug into the very steep hillside, with little cobbled paths and stairways leading up and down in between, and this night, they are thronging with tens of thousands of people – so many that it is hard to walk. There is a calm and expectant atmosphere – until the procession arrives, when suddenly fires and sparkling fireworks are lit. Wherever the procession passes, there is clapping and cheering. Every now and then, the procession stops, the band quietens and the sound of a solitary flamenco voice rises from the crowd, filling the valley while everyone else holds their breath. Then more cheering and clapping and dancing round the fires while the band picks up again and the floats continue their slow and strangely mesmerising dance up the hill. The stamina these people have is incredible! Some of them are out for near on 12 hours!

On Sunday, Frank feels strong enough to come on an outing. We run into four processions, among them the one with my favourite band. Even if you are not religious, you cannot help but be moved by the devotion of the people involved, by the sheer size of the operation, and for me, the sound of those plaintive but powerful brass bands – including impossibly high trumpets – (when they play well!) touches something deep in the core of my being. It is also quite freaky, nay sinister, to see so many people with strange pointy hats and their faces obscured, apart from slits for their eyes. Even if you try not to think of the Ku-Klux-Klan, images of strange fraternities and orders come to my mind, and from there it is only a small step for me to be thinking about witch-hunts and the inquisition. I’m not well versed in the history and meaning of these pointy hats, but I fear if I enquire properly, it can easily get worse than what my imagination is supplying now. There is a sinister dominance emanating from these figures, especially those who sport pot-bellies and ornate silver staffs. Wikipedia  gives a fairly light-hearted version, but I’m not sure that this is the full story…

We also stroll up to Sacromonte , to see it in daylight and to take some photos of the extraordinary architecture.

As we come back down the hill, we meet the last procession of the week as it enters the cathedral. On our way back home to Emma, we see people folding the sheets that decorated the many tribunes. Pretty swiftly, Granada returns to normal, and it would seem like it was all a dream, if it wasn’t for the screeching of tyres, due to the streets being covered in wax from the penitents’ enormous candles – there’s even a proper triangular street sign warning people of the wax!

We’ll finish this blog post with a priceless photo of the procession – children collecting wax dripping from the candles. They carry around their wax balls like trophies. 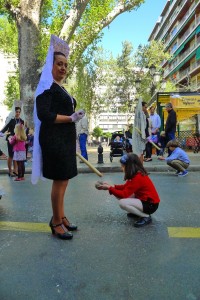