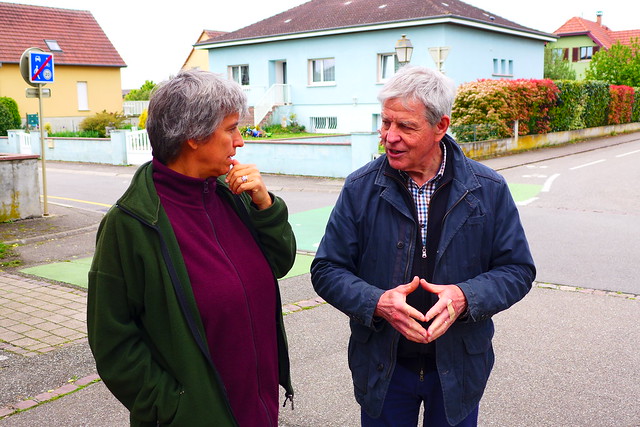 True to his promise, Mr. Mensch had made a space in his timetable to meet us and show us around his town. We started off in the town hall where we met Haida, the new assistant, who was to come with us on our trip around town, and over a cup of tea, we had a chance to ask questions and chat about the general idea behind the transition town concept. The idea is to move the town towards a state of independence from oil, on all levels, starting from Transport, via fuel and general consumption, to a more sustainable way of living on an ecological level. Mr. Mensch talked about three central areas that are the supporting pillars: freedom of the mind, freedom of economics, freedom of food production. All areas are interlinked.

Although Ungersheim is small (2400 inhabitants), the projects are large and built to last, and there are many of them (here is a link that describes them better than I could do). It is palpably different if a local government is the driving force behind such a movement, compared to Totnes where people have to find their own resources and spend time and energy to convince the local government. I suppose here, the local government has to spend time and energy to bring the population on board the project, but it seems like it really is working.

What we couldn’t find in the brochure was any evidence of a cultural centre, any kind of hub, and when we ask Mr. Mensch about it, he says the town hasn’t got one. But then we climb into his car to visit the various projects and we find out that every single project he shows us is created by the people for the people and there is no shortage of large communal spaces indoors and out. I guess something must have got lost in translation, or maybe the French take for granted that every little town has their own large sports complex, cultural centre, theatre space etc.

In the case of Ungersheim, there is a huge sports hall with a large meadow outside that is going to be transformed into a space where, in cooperation with the surrounding residents, low impact structures will be built with living, vegetal materials such as willow; there is a Dojo for Karate etc., a school kitchen supplying meals with locally sourced ingredients for 7 schools, a swimming pool, a primary school and Kindergarten and a cultural centre which houses a library, various administrative offices, a meeting space for older people and a theatre. All of these buildings are heated by one large wood-fired boiler system. All of them have solar panels that supply them with enough energy for their electricity (in France, extra electricity produced can but doesn’t have to be fed back into the net). 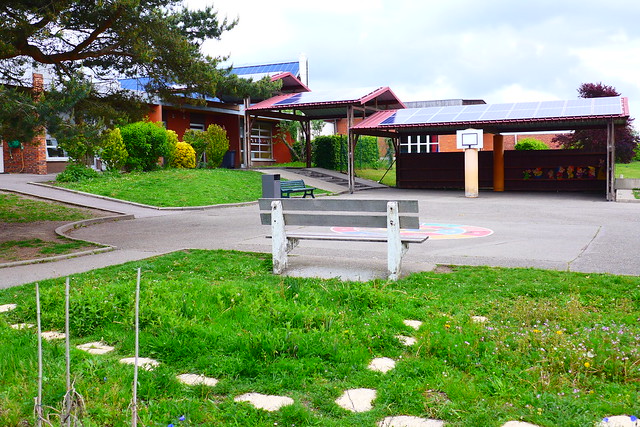 Next, we visit the Passive Housing project, where Mr. Mensch tells us that the council bought a piece of land from a rich Swiss landowner, thus pre-empting speculative development on the fringe of their town, and made strict conditions of sale. They ‘wasted’ two years through trying to create an association instead of offering private ownership, but once this was changed, people applied and built their own houses according to the ecological conditions imposed by the council.

The buildings are arranged around a previously existing stone building that can now be used for communal activities. 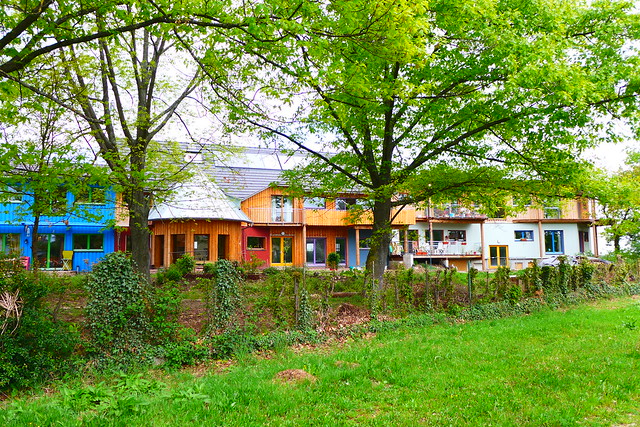 Once more, we climb into the car and drive to the most recent project, (parts of it about to be opened in a month or two) a market garden, created in the old potassium works on the edge of the town. Over 30 people work here, providing vegetables for a veggiebox system, as well as supplying 50% of the school kitchen’s fruit and vegetable requirements. The new buildings will house a cool store, a market garden kitchen that will process any surplus into soups, jams, pickles etc., a canteen for the workers, and eventually there will be a wood fired baking oven, a fruit press and a micro brewery too. All buildings, needless to say, are built to highest ecological standards and in this project, various sustainable building methods from around the world are showcased. One part of the old potassium works have been transformed into the market garden, another part is being left wild for nature to reclaim it. A nature walk leads through that part which unfortunately we didn’t have to the time to explore.

We wonder aloud, who pays for this incredible project? Mr. Mensch says the council foots the bill, with some regional and national help. The idea is to get it up and running and then have it maintained by an association. I ask if the project will pay back the initial investment, and he says they will but not in monetary terms. The payback will be one of human value to the town. It brings employment, it regenerates an abondoned area, it produces organic local food. With a smile on his face he says, this is one of my more crazy projects. 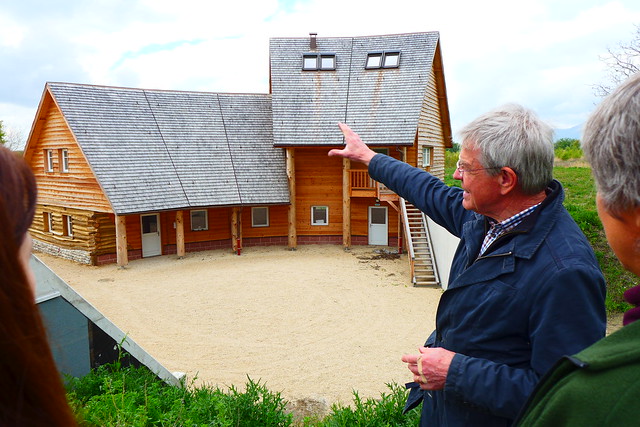 Our time slot with him is up, the mayor has to return to his office… he heartily shakes our hands and asks us to convey his greetings to Rob Hopkins should we meet him on our return to Totnes.

One person in a position of power, with charisma to convince people of his ideas, and with tenacity (he’s been Ungersheim’s mayor for 20 years) – the difference this can make to a town is impressive and inspiring. What a Mensch!

For more photos on this chapter, click this link