With a ‘slight’ delay, here are the last few chapters of our Morrocan experience.

It is a cool, misty, slightly drizzly morning when we wake up. I take a walk around the large, rambling campsite. Everyone is still asleep, even the row of Ibis, on the wall of the abandoned swimming pool, still have their heads under their wings. Somewhere into the mist, I hear the gentle lapping of water against the shore of the lagoon, and in the far distance there is the steady whooshing of the sea. This is a good place to buckle down to do some serious writing, to catch up with the blog and digest the intensity of the last weeks. 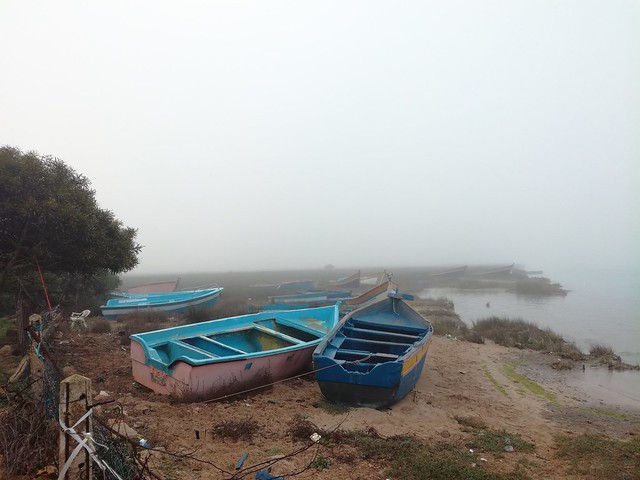 Later in the morning, when the sun comes out, Frank wakes up and goes to the market in town, up a steep hill, to get some fresh fish for lunch. I’ve got my head in administrative tasks by that time. The various events I’m running this year are shaping up nicely, but there’s always something to do – I always seem to be chasing my tail, trying to answer the backlog of emails or liaising with teachers, venues, dropboxes for sheet music, information to musicians etc. etc.

I’m very excited about the 1st International Bandoneon days, coming up in April, which will take place in the South of Germany in a little town called Staufen. It’s an idea I’ve been hatching for a number of years and this year it’s come to fruition. We will have 30(!!!) Bandoneonists meeting for a weekend of study and practice, ending in an informal concert on Sunday April 22nd, to share the wonderful sound we can all make together. We will also be joined by Rocco Boness, a famous Bandoneon repairer and restorer, who will teach us how look after our bandoneons and competently deal with minor repair issues ourselves.

As an organiser, I am always privileged to get an advance impression of the energy that people will bring to an event, by the way they communicate with me, and I can tell you, there is a swell of enthusiasm behind this group of participants, as well as the teachers, that I have rarely experienced before. It has already fired me up to organise two further dates to do with Bandoneons, one in the autumn and one next spring!

But before that, let’s return to Morocco…

Having been to the south of the country with its dramatic landscape and stark beauty, the north feels almost like Europe again. The campsites are more like french campsites, with well functioning toilets and showers. However, there is a sharp reminder of another world when, on our walk into town, we pass a shanty town of nomads, now somehow not feeling poor but happy and free (like they seem to be in the South) but poor and squeezed, marginalised, hanging on in corrugated iron shacks on the edge of a more wealthy town.

In the afternoon, we meet Leila who comes past our van on the lagoon side of the fence, scouring the brush for rejects from the campers. We meet and talk, reaching hands through the fence. She retrieves a bowl for us, which Frank had inadvertently flung over when he’d only meant to throw out the water.

There is a poignancy to our meeting, one world looking into the eyes of another, barred by metal wire. I don’t have the presence (and I berate myself for it later) to arrange to meet her properly, outside the fence, or even to give her something as a thank you for handing back the bowl. She’s obviously not allowed to enter the Campground, but I could go out. There is no equality in the way locals and tourists are treated here. We’ve heard repeated stories of the Moroccan police being difficult to locals, however, we are always waved on, never questioned and even smiled at. 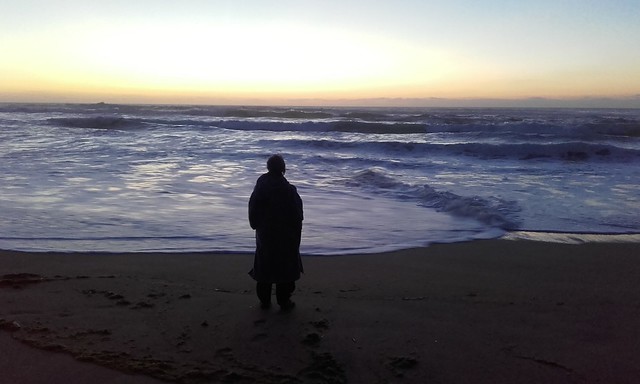 On our way further up north, we drive past rich fields and miles of greenhouses, interspersed with pretty rough-looking shanty-towns, presumably where the farm workers live. We see many people from countries south of Morocco. It’s not just Europe that has an influx of immigrants. My guess is that the North African countries have a much higher percentage of immigrants and refugees, but I don’t have any figures to corroborate this.

The flat fields lift up into hills covered in Olives as we approach Ouazzane. 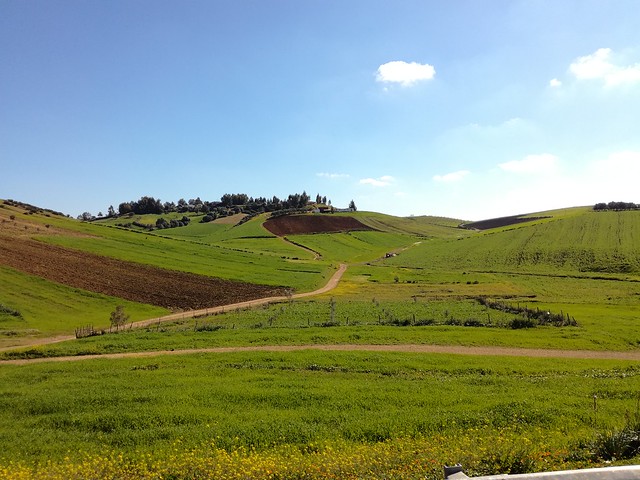 There is a lovely Moroccan moment when we hesitate for a second at a large roudabout. A man on a motorbike calls out where are you headed for? We tell him we are looking for the way to Chefchauen. Follow me he says and at the green light, he’s off, not even checking if we are coming. He leads us through the town, sometimes we see signs for Chefchaouen but more often not, and there’s no way we could have found our way through the maze of road works without him. We come to a roundabout at the other end of town and he motions left while turning right, giving us a little nod and a wave and he’s off. No demand for anything, just the will to help. We have experienced this so often, and we will definitely miss it when we return to Europe!

The light is fading, so we turn off the main road, taking a little winding road to the top of a hill and stop for the night, next to a farm-house. 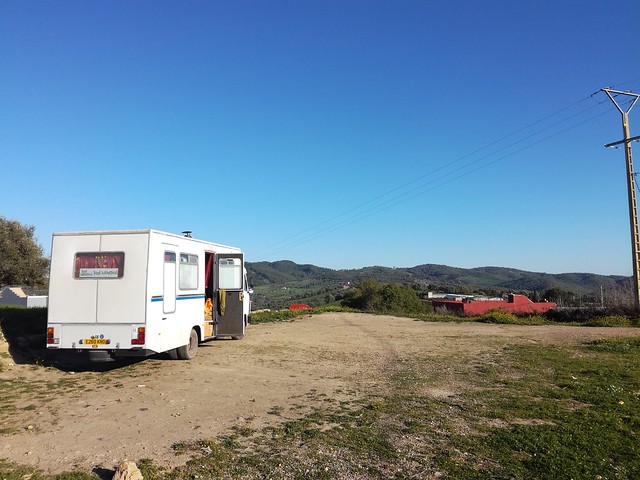 I go for a little early evening stroll. The landscape looks lush and green, and I can hear chickens, donkeys, dogs and cows as I walk along little lanes with overgrown hedges. It reminds me of northern Spain. On my right, some people are busy building the second floor to a house with breeze blocks, while to my left I hear a couple of women talking to each other while they are doing some serious hacking of a tree or a bush. I can’t see them behind the thick hedge, although I think they are able to see me, because like crickets, who stop chirping when you approach them, these women stop all noise when I come close, only to pick up again once I have passed. Maybe they are up to no good, harvesting something that isn’t strictly theirs.

In a field by a farm, a man is ploughing the earth with the help of a donkey. Just when I pass, I see him calling his wife who comes along and takes the donkey’s reins while the man goes off with someone else to see to something down the road. The wife settles in for a wait.

About an hour later, I pass the same spot, and there she is, still holding the donkey’s reins! Two other women approach her and they have a quick exchange that has everyone laughing. When I join I try to explain to the women – in my best arabic – that she’s been waiting a long time for her husband to return. This has all three of them in stitches, bending over laughing, holding their bellies and wiping tears from their faces. Other exchanges, obviously comments about the men, only refuel the laughter. Eventually the husband returns, takes the donkey off his wife’s hands and continues ploughing. In a conversational tone, he offers me the fields to buy, which causes another salvo of laughter and the women invite me to come and have tea with them.

This is a beautifully kept house with an immaculately swept little yard, watched over by two most ferocious but also frightened dogs. Even after the women tell them to go away, they randomly return to have a run at me, looking all fierce and furious, only to stop just short of the act of biting me, scooting off with their tails between their legs instead.

I escape an invite for dinner only by promising to return the next morning. When I get back to the van, Frank has made a delicious meal for us. 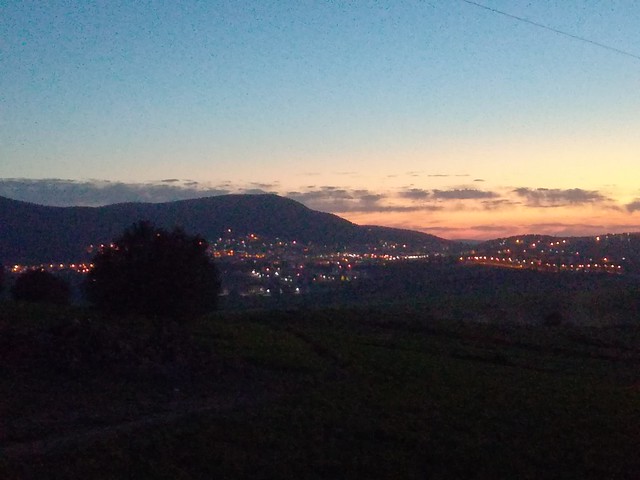