It is in the places where people say nothing happens, where we have our strongest experiences.

Just after Marzabotto, we turn right to cross the railway and then up a very steep valley to the Parco Storico di Montesole. It is dark already; our favourite time to go up steep-sided valleys on narrow roads, partly so we can see the headlights of approaching cars, and partly so we can’t see any scary drops by at the road’s edge. About five kilometres up, we turn into a wide car park by a place called Poggiolo. We saw up a few logs for our stove and admire the spectacular night sky – there is no external light to be seen anywhere – before turning in for an early night.

Tonight is the night where back in the UK, the government is making a decision over whether to bomb Syria or not. Frank and I talk a lot about this before going to sleep. We fervently hope that enough MP’s will choose the non-violent option. It seems no coincidence that we are up here in Montesole, where thoughts of war and of peace and the slaughter of innocent civilians are so much part of the landscape.

I wake up in the middle of the night and lie awake for a long time. This place has a strong energy, and somehow I feel as if something big is happening. I can only hope that it is something good…

I suddenly see with great clarity that the dividing line never lies between countries, it is about an attitude of creating, maintaining and solving a conflict with violence, or by peaceful means and actually, that line runs inside every human being – every thought, every action lies on one side or the other, of this divide.

The next morning, we meet Mauro who runs the Restaurant and B&B at Poggiolo. We learn from him that the UK has decided to join in the bombing of Syria. We have a conversation about this with him. He raises the question of why there are no partisan groups in Syria fighting for the liberation of their country, like the Italians did here some 70 years ago. I don’t even know if that is the case or not, the media doesn’t tell us. We try and connect to the internet but to no avail, so we just have to be with our own thoughts for the time being. We are both quite distraught about the bombing of Syria.

We go for a walk. The nature here is outstanding, fantastic vistas across two valleys and apparently huge amounts of wildlife – several types of deer, wild boar, mountain goats and even a pack of 12 wolves! We find various animal tracks on a muddy path where it seems they’ve all been to the same party! 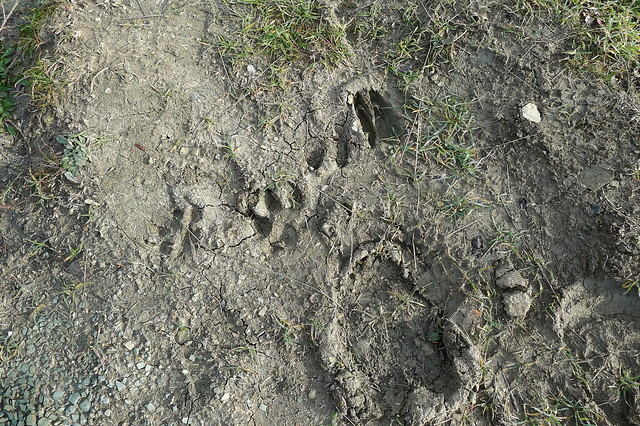 On Mauro’s recommendation, that evening we go out with a torch. When we shine it across the fields, we see pairs of eyes shining back at us, and sometimes they fly across the fields like glow worms. I remember stories of haunted places, especially bogs, where people used to see eyes looking at them at night and attributed them to the souls of the deceased. These are the eyes of deer though. It is incredible how they can just jump across large areas of bramble and undergrowth and not make any noise at all, except when their feet clatter across a road.

The second night, I am woken again by the energy of the place. Despite the horrendous events that have taken place here, it feels like there is a lot of peaceful energy. This may well have to do with the fact that the suffering has been commemorated and a lot of subsequent work has been done to promote peace. There is a monastery and a nunnery, founded by Don Dossetti and housed in the farms where the massacres took place, where they pray for peace. There is a commemorative walk, well documented and stretching across a number of villages and mountaintops. There is a Scuola di Pace, which actively supports peace initiatives. Lying awake and listening to the beautiful silence of the night, I suddenly get the urge to do the commemorative walk and to go to the nunnery and speak to the sisters.

The next morning, I pack my rucksack with some water, a clementine and some pumpkin seeds and head off up the hill. It’s about an hour’s walk to the monastery, leading past the sites of the massacres, but it takes me more than two, owing to the well-placed tablets telling the stories of each little group of houses. Within a week, during the autumn of 1944, German SS troupes combed through these mountains to root out partisans, but mostly what they found were women and children. This didn’t deter them from killing everyone they came across. It was a horrendous punitive action for not finding the partisans. In one village, 60 people had crammed themselves into the kitchen of one house. The Germans threw hand-grenades through the windows and burnt the house down. Anyone who tried to escape into the woods was followed and shot.

In another village, 90 people had fled into a church. They shot the priest at the altar and marched the others to the nearby cemetery where they were lined up, little ones at the front, tall ones behind. Then they opened machine gun fire and threw a few grenades for good measure too. Almost everyone died, only a few survived under the pile of dead bodies. To this day, one can see bullet holes in some of the metal crosses, only a foot or two from the ground. These shots were meant for the children.

To read the stories of so much violence in such a peaceful place fills me with great distress. I am German. This is my people’s history just as much as it is the Italians.

I remember my grandmother telling me about my grandfather coming back in the middle of the night during the war, at a time when he was a reporter at the Russian front. He had witnessed a similar atrocity but thinking that this was the horrible excess of some SS soldiers having gone mad, he had reported the incident to higher authorities, with the result that he was told in no uncertain terms that if he didn’t shut his mouth, he’d be facing the firing squad himself.

My grandfather had taken a couple of days’ leave and returned to Berlin to tell my grandmother. She said he’d spent the night crying and then left the next morning with the words “if I don’t come back, it’s because I have refused to be part of such a situation”.

He did come back, but I think this experience never left him. Atrocities destroy everyone involved, and cast a long shadow into the future.

I arrive in the monastery in a great deal of inner turmoil. There is a modern, simple church and the door is open, so I sit down to allow myself to feel my grief over the history of this place as well as the current situation in Syria. I feel like I want to go and apologise, but to whom if everyone was killed? A young sister comes in and I speak to her, about how sorry I feel that my people created so much suffering in this area. She opens her arms and gives me a big hug full of warmth and love. Another sister comes in and we speak a while about peace, about their work here of praying and of guarding the memory so that peace may grow out of it. Sister Adela leads me to a gilded and decorated door in the wall. Behind it is the chalice the priest used when he was shot. He was in the middle of blessing the people when the SS broke into the church to round everyone up. The Chalice disappeared but was found years later when the church was restored. One can see how it was deformed by bullets. It was given to the convent for safekeeping. Adela says it is here to help us reflect on our own sins. No-one can hold the chalice, no-one is pure in their heart. I guess this is the catholic version of my own thoughts a couple of nights ago, when I felt that the divide between peace and war lies inside every individual.

It seems very important to speak to the sisters. To speak, to communicate intentions of peace, and to express the grief over suffering that has and is being caused.

I leave the monastery a different person from when I entered.

On the way back, I decide to take a detour and climb Monte Sole, one of the two mountains that were fiercely fought over. A narrow path runs along its ridge, all the way to the summit. I imagine how difficult it would be to approach anyone who has command of both ridge and mountain. The woodland falls down steeply and one would easily hear or see anyone trying to sneak up on either side. It is also extraordinarily beautiful, and easy to understand why local partisans would fight to their death to defend this patch of heaven on earth.

On the way home, I notice other tablets with excerpts of the Italian constitution. Don Dossetti, founder of the monastery and nunnery, partisan during the war and active politician after the war, was also one of the founding contributors to the Italian constitution. Some articles emphasise the separation and legal immunity of the church from the state. Others focus on the right to work and the state supporting everyone to find the right work for them, and on the guarding and dissemination of culture and heritage.

My knee is starting to act up, due to the steep climb up to and descent from Monte Sole. I end up walking part of the remaining 2 kilometres backwards, so as to use different kinds of muscles in my legs.