We like the way these two greet us, with a vigorous handshake and a great big smile, so we decide to accept the invitation.

They live not far from the souq, and we follow them in our Emma as they wend their way through little village streets. Suddenly the road gets very tight and also slopes sideways, and going around a right hand bend we hear a terrible crunch: Emma has hit a stone wall at the top, due to the strong sideways camber of the road. Although our windows are incredibly strong, Emma having been a mobile bank in her former incarnation, the stone has won and there are shards everywhere, inside and out. Luckily it’s one of the smaller windows and, even more lucky, it’s the one behind the stovepipe, one we couldn’t really open anyway. And, amazingly, we’re right outside a campsite, so we make a quick decision to park Emma there and continue following Brahim and Ezzora before thinking about how to repair the window. After a 15-minute delay (mainly to calm ourselves down from the shock of damaging Emma) we arrive at their house.

I don’t know how Ezzora managed to create a feast in such a short time, but we have a Moroccan salad, followed by potato chips, fried fish and lentil stew, then yoghurt, fruit and some incredible home-made biscuits. We want to learn how to make the biscuits and she wants to learn how to make Frank’s marmalade, so we arrange to swap cooking sessions: Marmalade making tomorrow, biscuit making the day after. This allows us to spend quite a bit of time with them, to get to know each other and ask more personal questions to gain an insight into their lives. We are intrigued to know how they met, having married only recently. Brahim describes how his uncle knew Ezzora’s family and mentioned her to him. One day, he took the initiative to ring Ezzora, just to talk to her. And what did Ezzora think when she was rung by a stranger? She says she liked his voice and was happy to hear from him. Their telephone calls continued for 2 months, each telling the other all about their lives. Brahim says he was very honest and explained his situation as a divorced man with two children, who his estranged wife wouldn’t let him see. Ezzora comments on how she liked what she heard; she felt he was a kind and sensitive man and that she was lucky to have found him – or be found by him (Brahim translates what she says to us, with an exquisite mixture of shyness and pride on his face).

Eventually, they agreed to meet in person and Brahim drove all the way to Casablanca to visit her. They spent 8 days walking around Casablanca and going to the cinema. After that followed several more months of phone calls, while they arranged their wedding. It was a small, private affair, not one of those huge Berber weddings like we had witnessed. And now, how does Ezzora like living in a small town, having spent most of her life in a large city? I ask. My home is wherever my husband is, she says, and there’s a lovely shine in her eyes. These two really have found each other.

(A few days later, we have another conversation where I pick up a sense of isolation though. It seems that Ezzora hasn’t yet found any real women friends here, and this was partly what I sensed in that first handshake and invitation when we met them at the souq. It was her who made the invite, which seemed unusual, while looking very directly at me. She is a strong and outspoken woman, slightly out of place in this rural setting but still happy to be here. I wish we had more time to become real friends. I’d have to learn Berber too, I think.)

After a two-hour meal, Brahim absents himself for evening prayer, after which he invites us for a stroll in the fields by the river. We all go out together. Outside the door of the compound sit both their mothers, chatting with each other in the last rays of the evening sun. They seem to be getting on well. We get showered with kisses and blessings before we are allowed to continue our early evening walk. 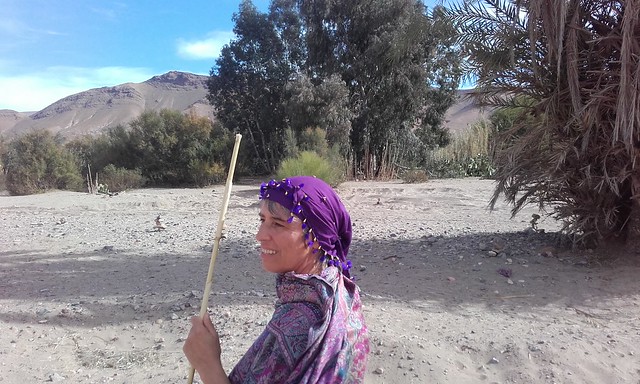 This little village houses about 80 families, each of whom has a parcel of land down by the river. It’s busy down there – mainly women at work – some harvest olives, others gather green fodder for their animals. There is a lot of merriment as we pass by. Maybe it’s a funny idea for those for whom walking is not a leisure activity, to see others out on a stroll. I keep trying to hit the cadence of greetings. They fire questions at each other: How are you, all good? Your mother, all good, your father, fine? Your family, your house, your fields? It’s happening in Berber and arabic at the same time and you mustn’t leave time for an answer. And when they realise we are foreigners, they often add French for good measure: ça va, bkhair, lebess?

One evening, returning from our stroll through the fields with Brahim and Ezzora, we spot a whole lot of beehives and a man working by them. Frank and I drift off towards him but are called back sharply by Brahim – where are you going? to meet the beekeeper. Oh no, you can’t just go and talk to him! No amount of reasoning works, not even the fact that if we hadn’t done precisely that -walking up to strangers and talking to them – we’d never have met the two of them. Somehow, this is different though and it seems to be almost dangerous to just walk up to a man who deals with Bees. It’s almost as if he’s an outcast, but one that also imbues people with a healthy portion of respect, mixed in with a dash of fear. A few days later, we mention the beekeeper to someone else in the village and get a similar reaction. Bees are dangerous and beekeepers too, for some reason. We wonder if the beekeepers themselves maintain this image – it would certainly help keeping the price of honey so high. A pot of good quality honey here is up to 6 times higher than in Southern Spain. Of course partially this is also due to the fact that there isn’t that much honey around, what with the landscape being so arid.

Just outside Brahim’s house, there is the local olive mill. Each family gets a day or two allotted to bring their olives and with the help of a donkey, olive oil gets produced. 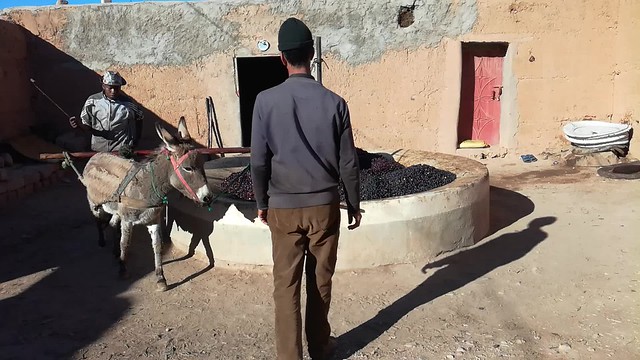 This is not for sale, each family just produces enough for their own use, and no-one uses chemicals (famous last words. We just heard that many of the chemical fertilisers and pesticides that cannot be sold anymore in Europe due to tightening of regulations, go to places like Morocco where the rules are not as strict). However, after talking to the men at the mill, one of them goes back home to bring us a litre of the delicious green elixir.