If we hadn’t smashed our window, we would never have come across this wonderful little paradise of a campsite! We receive a warm and relaxed welcome from Ali, the manager, who promises to help us find someone to repair the window. The next day, he brings a young and taciturn man who has a good look and goes way again, only to return some hours later with a piece of metal which he proceeds to insert into the space where once there had been a window. It’s not an easy job and at times we feel like he’s taken the wrong measurements, but he persists and eventually it slots into place. We are impressed by his tenacity and workmanship, except for the way he drips silver paint onto Emma.

It takes him the best part of the day to repair the window and he only charges us a 100 Dh – we give him 140. Now Emma has a little silver blind window – it’s like she’s had her first dental filling!

Ali shows us around the campsite. There are some Berber tent-style huts for simple accommodation. The shower has a wood-fired boiler (and is fantastic!), there is an enclosure for animals (but it’s empty except for a couple of little dogs), and there are a number of incredible trees, some of which are of a local species that is now rare. We meet Ahmed, the owner of the campsite, a few days later and he says they are called Atlas Pistachios. They don’t bear fruit but the resin gets burned for special ceremonies.

Ali tells us that Ahmed is thinking of selling the campsite, as well as a nearby, walled plot. He shows us both and for the first time in our 4 years of travelling we are seriously tempted. This seems a very special piece of land in a lovely village and we consider what it would be like to run this place, while also maintaining our lives in the UK. Looking at the campsite, our imagination runs wild. It will need quite a lot of TLC, having been just ticking over for a number of years, since the death of Ahmed’s son who was a great tour guide and involved in maintaining the site. 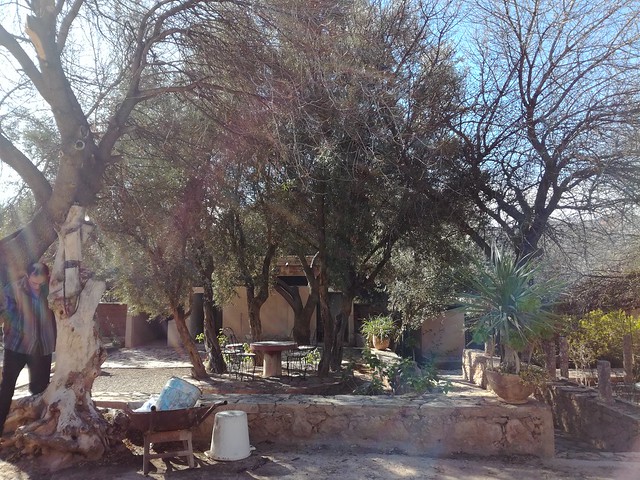 But this lack of attention is probably what attracts us, there’s lots to do to make this place sing again. Plus, in combination with the other piece of land, there really is room for expansion. For a whole 48 hours, we mull over the possibility of buying it. We dream about chickens and gardening, about going to the local souq on a donkey, and then we wake up one morning clearly knowing that now is not the time to do this. We are too deeply involved with life in the UK in general and with our children in particular. While we travel, we may be physically absent, but we have a lot of space and time to be in touch with them. If we were to take on a project like this, our headspace and energy would be fully taken up, and it’s just a bit too far away from the UK for anyone to just ‘pop over’ and visit.

We meet Ahmed once more to tell him of our decision and leave him with a suggestion that maybe we could come back next year and stay for a month, giving some of our time and energy to improve the place and maybe help him with a ‘rejuvenation’ project. Ahmed must have liked our ideas, because after offering it to us, he’s adamant that he will only sell his precious piece of land to someone he feels will appreciate the place and continue to respect what he’s built up. We like him too. He’s unusual and we share a few personal life stories before we bid him a heartfelt good-bye. Even though we don’t want to buy this particular one, thinking about it has clarified some ideas about the possibility of owning/running a campsite. 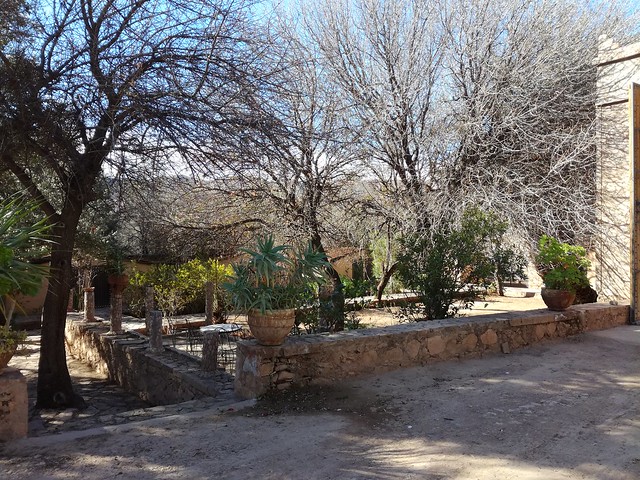 Ahmed’s place, an Auberge with rooms, is on the other side of the river from the campsite, so after visiting him, we decide to walk back across the dry river bed. We enter quite a magical place; a forest of silver-barked trees, maybe some kind of poplar, is followed by all sorts of bushes and plants we don’t recognize and there is a particular type of silence here. I can imagine this to be baking hot in the summer, with snakes languishing in the hot sand. 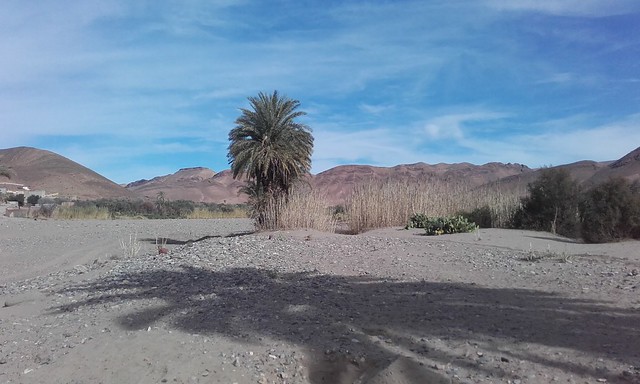 At the campsite, there’s a young man, Abdulatif, who helps looking after the campers. One day Ali and Abdulatif get it in their heads to cut back the trees, but they make a real hash of it. Ahmed is shocked when he comes to view the results. Abdulatif is a farmer, so it’s really surprising that he doesn’t know how to prune trees properly. 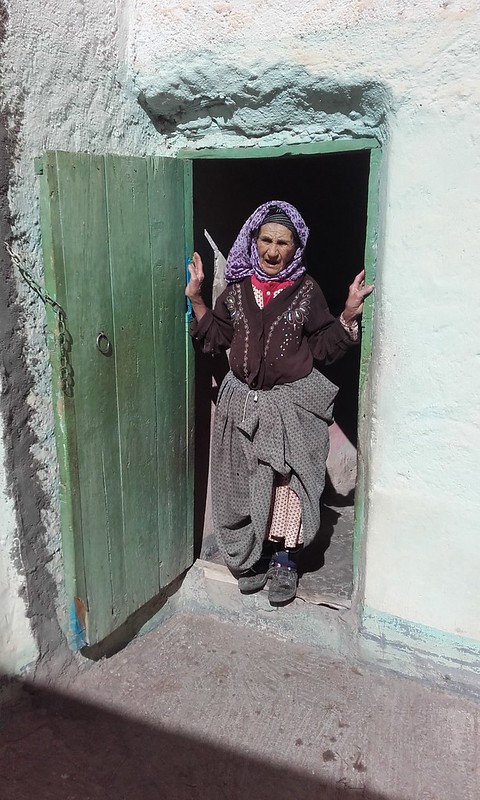 One morning, Abdulatif invites us to come for breakfast at his house. We meet his 80 year old mother, as well as some really ancient animals; a 37 year old cow and her calf, and a 40-year old donkey called Ariel. 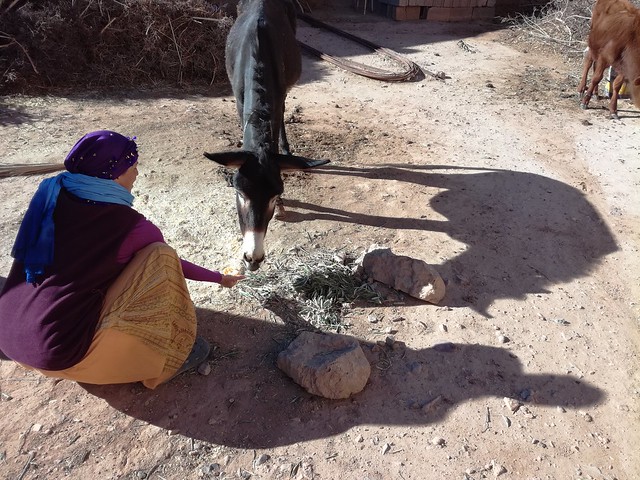 The house is a huge Riad – Abdulatif and his mother appear to rattle around in its vastness. The very traditional kitchen with wood fired ovens for cooking and baking seems curiously at odds with a modern, two storey-high building, where an undercover courtyard gives on to many rooms on two floors. There’s a magical garden too, with all sorts of fruit trees – figs, almonds, lemons, olives and bergamots. The almonds are in full blossom and the garden is humming with bees. Abdulatif brings out delicious, freshly baked flat-bread and Amlou and of course ‘Berber whiskey’ – the strongly mint and absynth flavoured tea, sweetened with piles of sugar, and we sit under the trees in the morning sunshine, discussing life in Morocco and Abdulatif’s plans for the future. 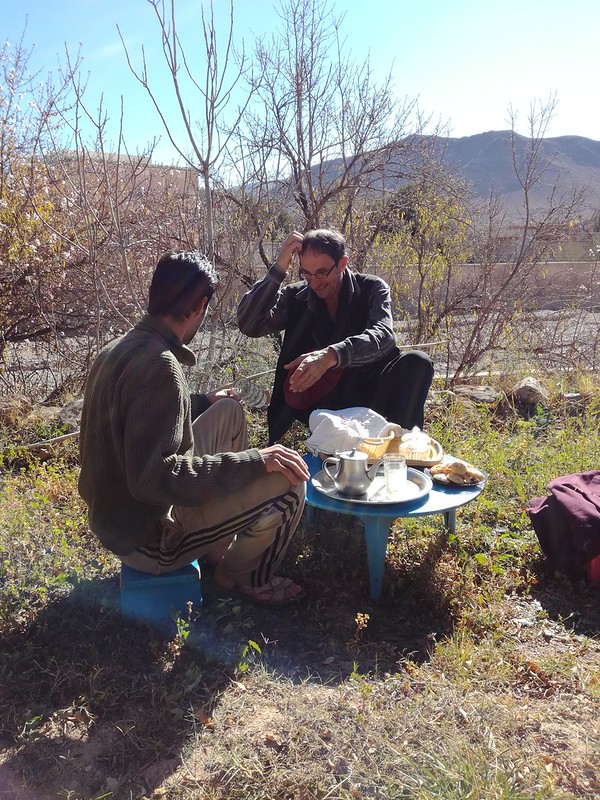 One evening, we hear the tell-tale sounds of another Berber wedding in the village, but we are still chewing over the experience of our first, so we pass on this one. That night there is a light snowfall! The temperatures really see-saw from day to night here – it can be up to 25 degrees in the day and then snow at night! I wonder what that does to the almond blossom?

One day, Ali lets water into the campsite and for a few hours, we hear the happy gurgling of a stream rushing through the Azequias, gradually filling the flower- beds. That night, we hear the extraordinarily metallic sound of a toad, right next to our van.

Despite feeling so at home in this camp site and village, eventually we have our last wood-fired shower, fill Emma up with water, bid a hearty farewell to everyone and get back on the road.