This campsite, the village and its beach are amongst the loveliest places we’ve discovered in Morocco, but even so, this morning, we are ready to go. There’s a fine sea mist over everything as we rise at 6.30am. Everyone is still asleep when we leave the site at 7, as quietly as we possibly can, given that we are starting a 7.5t lorry!

We stop at the entrance of the village and walk to Yesin’s house to pick up our 5 bags of plastic rubbish. The village is still asleep…apart from one or two people. Yesin’s mother is up and bids us farewell. Whilst dragging the sacks back to Emma, we meet three people and have a little ‘rubbish conversation’. They are surprised and very grateful for what we have done and wish us good luck in finding a recycling centre, as they don’t know of any in the region (I have visions of living with these sacks of rubbish all the way to Marrakech!). We are so busy talking about rubbish that we don’t realise these people are hanging out at the entrance of the village in order to hitch a lift to the nearby souq!

Never mind, someone else must have picked them up, because they arrive at the same moment as us. Meanwhile, we’ve picked up another hitchhiker who shows us a car park that we’d never have found on our own. We pay the attendant a few Dirhams, persuade our hitchhiker that we will be able to find our way back to Emma (otherwise he would have accompanied us for the morning) and then we dive into another souq adventure. This one is huge, and it has a large animal section. Maybe other markets had them too, but we may have just missed them- you obviously have to get there early. It’s about 8am, and although the mist makes everything look sleepy, it’s rush-hour in the animal section. There’s a real throng of men and in between them animals of all sorts, sheep, goats, cows, chickens, ducks, pigeons and rabbits. There’s quite a cacophony going on, but it’s not the animals making the sounds but cars hooting their horns trying to get through an already overcrowded street. Goats are lying on the ground with three legs tethered, shaking with fear, eyeing up heavy boots coming perilously close to treading on them, little lambs are bleating for their mother who’s being pulled along on a thin string. Quite a few people are there just with one or two animals. There’s a lot of talking going on, eyeing up of animals, opening of mouths and checking teeth. 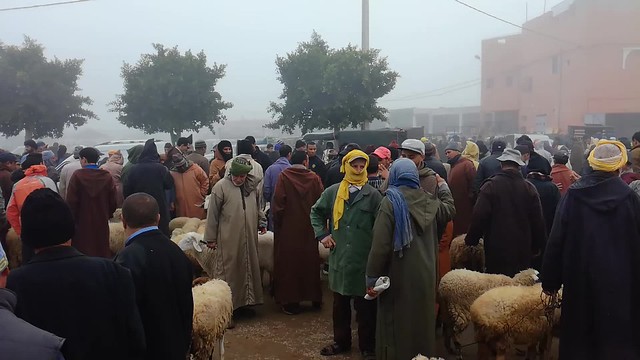 Frank and I squeeze through the men and animals (I seem to be the only woman on the market!), until we get to a calmer row of stalls. We are looking for a few things; vegetables, bread, maybe oil, maybe almond Amlou, maybe some tajine spices… at this time of day, many stall holders are meeting up behind one of the stalls, squatting on the ground to share some breakfast. We get invited, but politely decline and use the time to walk around the whole souq. One corner has a few young men with flame-throwers, singeing animal heads and feet. What for, we ask. Apparently, it’s good meat. It creates quite a stench. 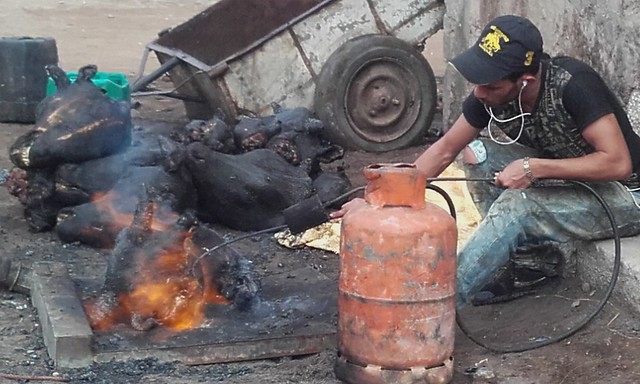 This souq has everything, from construction materials to spices and vegetables, from handmade tools to freshly pickled olives and bergamots.

We find some good olive oil, agree on a price and have to go to a hole in the wall to pay for it. In our search for other things, we pass by the same stall several times, so that by the time we get to buy the oil (plus various spices and three kilos of prunes), we feel like friends to the stallholder. He motions me to come behind the till and serve his customers! 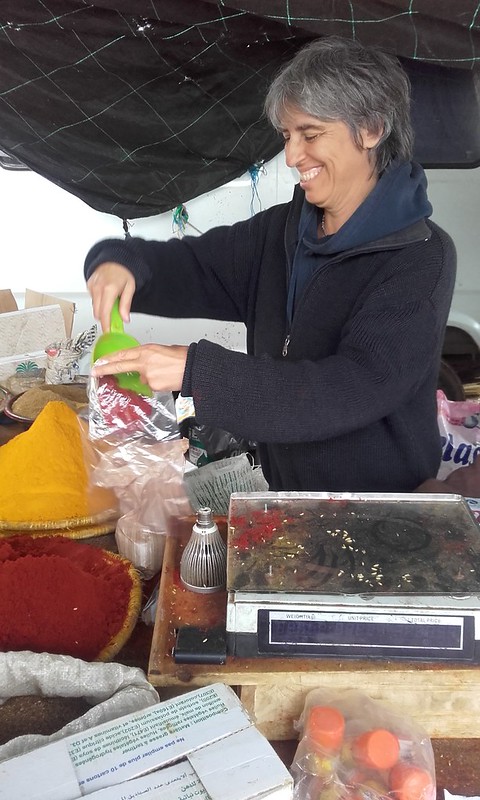 Near the veg stalls, there’s a long queue leading into a bakery. This must be good bread, so I queue while Frank goes to buy the veg. As I said, I’m the only woman in the market (And there are thousands of people), and I have a hoodie on, so some may not have realised my gender. The queue for bread is getting a bit unruly, people talking loudly around me and I’m being elbowed and the guy behind me is moving up far too close for my liking. Eventually I say ‘un peu de respect, un peu de distance s’il vous plait!’ and suddenly there’s a slightly shocked silence and an instant space opens up around me. From then on I get addressed very courteously and given space

The bread is indeed worth waiting for, and once Frank has returned and can protect my back, we are inside the shack and able to see the baker in action 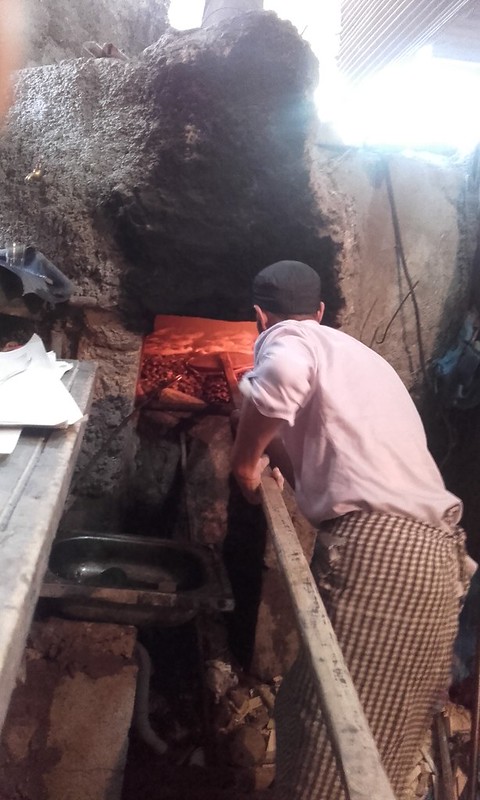 Visits to the souq are not for the fainthearted, and after a couple of hours of immersion, we are well souqed out and ready to return to the silence of the roaring sea. On our way out of town, we pass by some buskers who seem to have attracted a huge crowd by building up their act with a lot of talking. We don’t stop for long though, as we are tired and hungry. We don’t even get to drive the 10km back to the seaside but stop somewhere in a field to have lunch and a nap.