That afternoon, we have an appointment with Latifa and Smahim who we’d met a few days before, when we cycled to their village along the seaside. Their children’s bikes needed some maintenance and Frank had offered to drive by, with all our workshop tools in the back of Emma, to fix them.

They live with their two children Sarah and Mohamed Ali on the edge of Douira, another little seaside village in the middle of the national park, where Latifa runs a tiny grocery store, out of a window giving onto the street.

After some Berber tea, Frank goes to repair the bikes and I sit in the sunshine chatting with Latifa, when who should come round the corner but Betoulla, the woman we gave a lift to about three chapters ago! She recognises us too and there’s a lot of laughter and explanation in about three languages to our hosts. It turns out, Betoulla is a travelling saleswoman, hitching from village to village, carrying her wares in a big bag on top of her head. 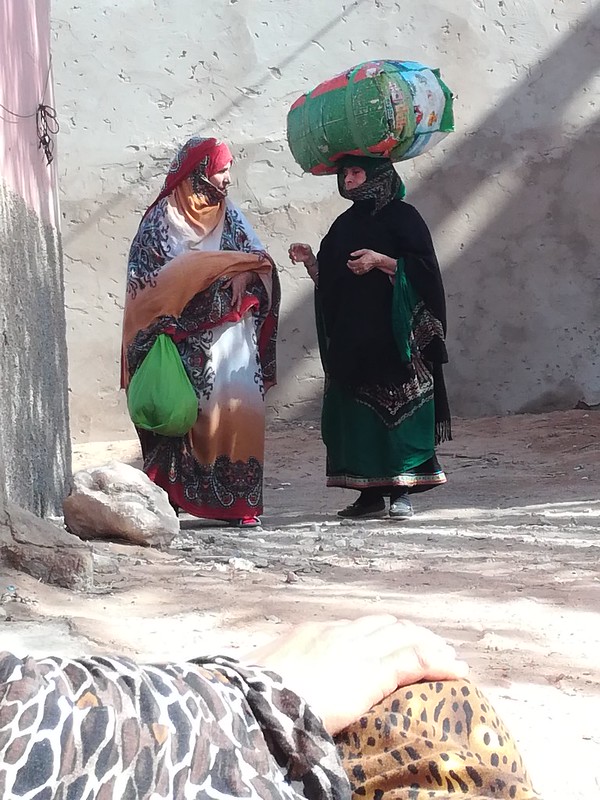 We arrange to give her a lift back to the main road later, which prompts Latifa to invite her to stay and share lunch with us all. There is a lot of humorous banter during the meal, as Betoulla is looking for a husband and a wife for her son. The wife should preferably be European, and she enquires about my two daughters – would they be interested in marrying a nice Moroccan man? I said, I could ask but that in our culture the young ones make their own decisions about who they want to be with/marry/ Ah, she shrugs, what a shame. But did I know of a rich old man who she could marry? preferably one who would die soon!

After dropping Betoulla back at the main road, we turn our attention to the mission of finding a recycling centre. The internet is not conclusive but there seems to be one in a village nearby, so we go in search. The first locals we ask don’t seem to know about it, but someone in a cafe knows and jumps into Emma to show us the way. Half a mile into the fields, there is is a fenced-off enclosure where construction work is going on. The foundations for a large building has been laid and there are huge mounts of predominantly agricultural plastic. We drive in and meet a few young people who tell us that the plant is going to be up and running in a couple of months. Once they understand that they don’t need to pay us for our rubbish(!), they gladly receive it and thank us for the initiative to pick the litter off the fields. 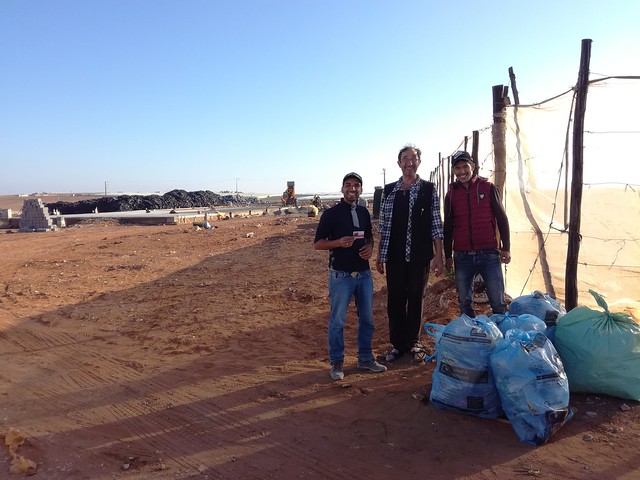 I have hope for Morocco. The general attitude and awareness for the plastic problem is much higher and more positive than anything we have experienced in Sicily in the last few winters, where people mainly thought we were bonkers picking up the stuff. Here, people help and also appreciate that while the situation has ameliorated since the national ban on plastic bags about two years ago, there’s much more to be done.

We finish off our day with a quick drive to the seaside for Frank to have a swim before heading off to Agadir, where we are due to pick up a parcel the following morning. 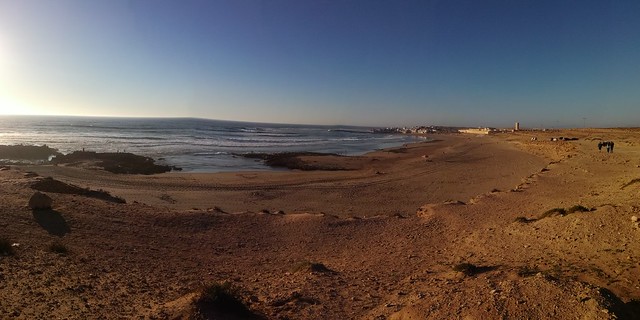