Today is the day we leave Spain… we thought we’d go and see Europe in a year, but have spent most of our time in Portugal and Spain. Even then, we only skirted around the fringe – we still have lots more of Spain and Portugal to discover! And everywhere we make friends, they tell us that any time we want to come back, their doors are open. This way, Europe gets bigger every day, or shall I say deeper.

We find a place to stay over night in Montesquieu, a little town of around 1000 inhabitants at the foothills of the Pyrenees. The next morning, when we want to go shopping, we find that all shops have closed down, which means that everyone has to use their car to go down to the big supermarkets 5km down the hill!

When we come back to Emma, a man waves us towards him. He has had a severe head injury (one side of his skull is missing), making it difficult for him to speak. But he seems very friendly and wants us to come and see his house. We follow him past a number of cars in various states of repair, into a wild garden with many building projects at varying stages. The house seems to be in need of a lot of TLC too, but he insists on showing us around, and knocking on a chalet in the garden to wake up his brother-in-law.

After a while a man appears from underneath a number of dust sheets, squinting into the sun and looking rather worse for wear. He is the total opposite of Omar, the man who invited us – he is very closed up and distant, avoiding our eyes and turning away from us. We apologise that he was woken, and he says “it’s alright, this is my brother in law, he is handicapped”. As we leave, I mull over this. It seemed to me that Omar, despite his physical disability is the less ‘handicapped’ of the two…

There seems to be a sense of no-man’s land near the border of countries, a place that the world has forgotten. No tourists, very few shops and other infrastructure. I guess when you want to go to a place as a tourist, you want to go to Spain properly, not just across the border from France, and vice versa. And historically, it is the end of the country, so roads peter out, unless they are big roads that cross the border. Of course now all borders are open, but that is rather recent. There is, unfortunately a different kind of ‘tourism’ prevalent though: as we draw near the border, we notice a lot of brothels along the way, and as soon as we cross into France, we see a lot of prostitutes sitting by the side of the road.

We stop by a shop to buy some French books and a map of France, to switch our mind into another language – the third one on our journey. It keeps the mind flexible!

As we drive eastwards, we come across the first rice paddies. 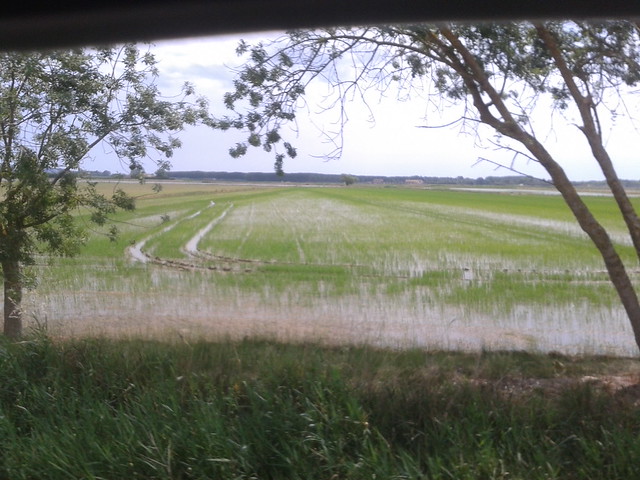 Posted in Uncategorizedwith no comments yet.